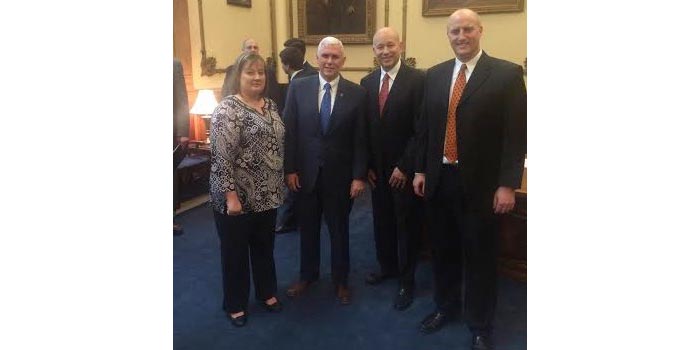 Rivals on the basketball court but partners when fighting for a common cause, the presidents of Grace College, Winona Lake and Bethel College in Mishawaka were among those attending the private ceremony this morning in which Gov. Mike Pence signed into law the Religious Freedom Restoration Act in the governor’s private Indianapolis Statehouse office. Dr. Bill Katip, president of Grace and Dr. Gregg Chenoweth, president of Bethel College, are shown here after the ceremony with Gov. Pence and with local activist Monica Boyer.

In a press statement following the signing of the controversial bill, Gov. Pence explained, “Today I signed the Religious Freedom Restoration Act, because I support the freedom of religion for every Hoosier of every faith. The Constitution of the United States and the Indiana Constitution both provide strong recognition of the freedom of religion but today, many people of faith feel their religious liberty is under attack by government action.”

Also attending the ceremony was Monica Boyer, a Bethel graduate and current Grace employee. Boyer, a political activist, is president of Kosciusko Silent NO More and is co-founder of Hoosiers for a Conservative Senate.