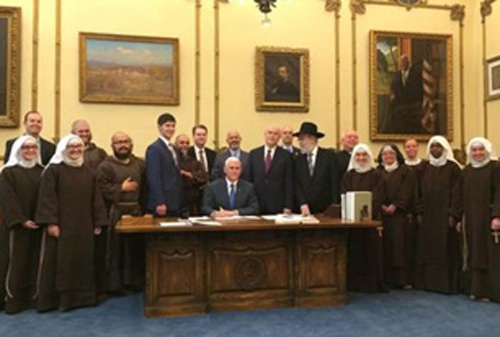 “Today I signed the Religious Freedom Restoration Act, because I support the freedom of religion for every Hoosier of every faith.

“The Constitution of the United States and the Indiana Constitution both provide strong recognition of the freedom of religion but today, many people of faith feel their religious liberty is under attack by government action.

“One need look no further than the recent litigation concerning the Affordable Care Act. A private business and our own University of Notre Dame had to file lawsuits challenging provisions that required them to offer insurance coverage in violation of their religious views.

“Fortunately, in the 1990s Congress passed, and President Clinton signed, the Religious Freedom Restoration Act—limiting government action that would infringe upon religion to only those that did not substantially burden free exercise of religion absent a compelling state interest and in the least restrictive means.

“Last year the Supreme Court of the United States upheld religious liberty in the Hobby Lobby case based on the federal Religious Freedom Restoration Act, but that act does not apply to individual states or local government action. At present, nineteen states—including our neighbors in Illinois and Kentucky—have adopted Religious Freedom Restoration statutes. And in eleven additional states, the courts have interpreted their constitutions to provide a heightened standard for reviewing government action.

“In order to ensure that religious liberty is fully protected under Indiana law, this year our General Assembly joined those 30 states and the federal government to enshrine these principles in Indiana law, and I fully support that action.

“This bill is not about discrimination, and if I thought it legalized discrimination in any way in Indiana, I would have vetoed it. In fact, it does not even apply to disputes between private parties unless government action is involved. For more than twenty years, the federal Religious Freedom Restoration Act has never undermined our nation’s anti-discrimination laws, and it will not in Indiana.

“Indiana is rightly celebrated for the hospitality, generosity, tolerance, and values of our people, and that will never change. Faith and religion are important values to millions of Hoosiers and with the passage of this legislation, we ensure that Indiana will continue to be a place where we respect freedom of religion and make certain that government action will always be subject to the highest level of scrutiny that respects the religious beliefs of every Hoosier of every faith.”