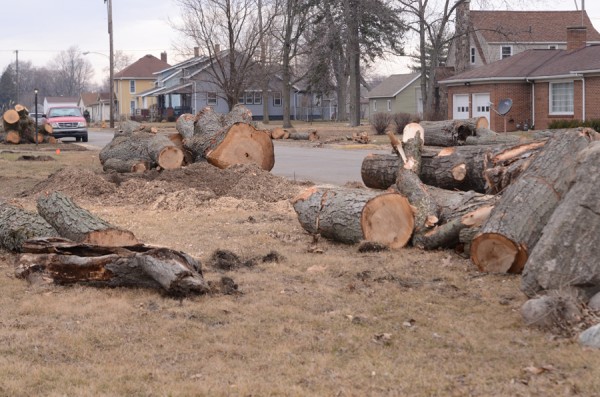 Have you traveled down East Market Street in Warsaw during the past week? You couldn’t help but notice things look a little different.

City officials have been hearing a lot of comments in objection to trees, which have been cut down between Argonne Road and Sherman Street. These objections are being heard not from the residents, but from the general public.

The removal of the trees is part of the Market Street project, the first phase to improve the infrastructure of the neighborhood. All of the trees removed were in the city’s right of way and will be replaced with trees more conducive to the residential area, sidewalks and roads. Such trees could include flowering trees, crab apples and dogwoods.

Warsaw Mayor Joe Thallemer, Jeremy Skinner and Tim Dembrosky, city and assistant city planner, explained why the trees had to be removed.

“The big issue is it was decided to widen the road,” said Thallemer. In discussing the plans with the residents, they expressed a desire for on street parking.To do this, trees needed removed. Skinner stated 95 percent of the residents along that section only have access to their property through alleys.

The removal of the trees resulted in some interesting findings. One tree was the carrier of the Emerald Ash Bore, 30 percent of the others were diseased or hollowing out. It was also discovered 70 percent of the maples were root bound, with the roots pushing up sidewalks, going into the road beds and possibly into the city sewer lines.

Many of the residents were pleased to see the diseased trees removed. “Not one person said, ‘don’t take down my tree,’ ” said Skinner.

The city is hoping to work with an arborist through NIPSCO, as it did on the West Market Street corridor. Skinner stated if there is not as much room as needed to replace a tree, and if the homeowner wishes, the tree will be placed where the homeowner wants it. 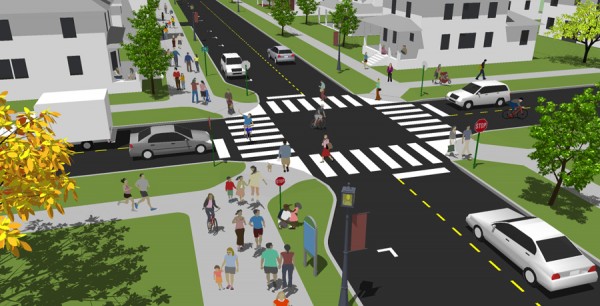 Residents of the neighborhood were included in the project. The design, takes into account on street parking, sidewalks, a pedestrian/bicycle path, all done on city right-of-way with the design for safety. There will be curb outs at intersections for better visibility for those walking and driving. “It’s not a thoroughfare and it’s not designed to imply it will be a grad strip,” stated Thallemer.

The next few weeks will see utilities moved, with actual construction of the project to begin April 1. The work is expected to be done in three phases, three blocks at a time. The creation of a pedestrian/bicycle path is through private funding.

Contracts have been signed for phase II of the project, which is being partnered with INDOT. “It will take longer, but will happen,” Skinner stated, noting it could be three years down the road.

Other neighborhoods will be targeted for improvements in the future, with many seeing the end product of the Market Street project speaking for itself.

“It’s a commitment to the neighborhoods,” said Thallemer, with the goal of maintaining the character of those neighborhoods. This project was 3 1/2 years in the making.

Completion of the project will be 180 days from the start of construction, baring inclement weather or unforeseen problems.