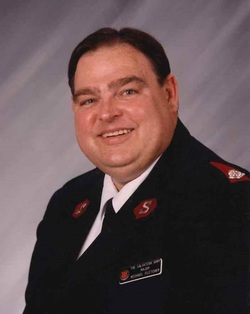 Known as Mike, he was born March 16 1948, in Warsaw to Lloyd “Bud” and Viola (Priser) Fletcher. He was a 1966 graduate of Warsaw Community High School.

Having met through The Salvation Army, Mike and Connie Sue Frazee of Rushville, Indiana were joined in marriage on June 3, 1967 in Warsaw.

Mike (and Connie) were called to serve the Lord in full time ministry through The Salvation Army. They were commissioned (graduated) as officers from the School for Officer’s Training on June 13, 1976 in Chicago, Illinois. Together they served from 1976 to 1999 in the following: St. Cloud, Minn.; Detroit Harbor Light, Mich.; Flint, Mich.; Tom Seay Center, Harbor Light, and Emergency Lodge in Chicago, Ill.; Muncie, In., Waukesha, Wis.; Moline, Ill.; and Sterling/Rock Falls, Ill.. After Connie’s promotion to glory on Dec. 24, 1999 and before his retirement, he would serve as the Quad City Coordinator in Moline.

Major Mike received his long service bar for 25 years of ministry on June 13, 2001. He also served with The Salvation Army in New York at Ground Zero after 911 as the supervisor at Site 2 for Emergency Disaster Services. He retired from active service as a Salvation Army officer on June 30, 2003.

After his return to Warsaw with the intention of marrying Carol Louise Borders – which he did on July 5, 2003, Mike became the director of the Kosciusko County Old Jail Museum from 2005 to 2008. He loved history and loved telling people about his hometown and giving tours of the museum.

Mike loved singing, playing the guitar and the cornet. He and Carol enjoyed playing instrumental duets. They also enjoyed traveling to see family – especially the children and grandchildren. When getting out and about was more difficult Mike and Carol enjoyed watching shows/movies with Tom Selleck in them. Quiet time together became precious. His family was very important to him. He was always happy to see them walk in the door and sad to see them leave.

As with a humble servant’s heart, Mike did for others before considering his needs or wants – especially as it pertained to his family. Most of all he loved the Lord and shared God’s love with everyone he met. He would always pray for, listen to and encourage anyone who needed it. Mike will be greatly missed.

Those closest to him with precious memories to treasure is his wife, Carol; daughter and son-in-law: Erin and K.C. Martin of Peoria, Illinois; two sons and a daughter-in-law: Sean and Lisa Fletcher of Chicago; and Nathan Fletcher of Milan, Illinois; two step-sons and step daughter-in-law: Vince Fletcher and Eric and Polly Fletcher – all of Warsaw; nine grandchildren: Kyle, Alexis, Brad, Samantha, Emma, Lia, Knickolas, Brennan and Haylee.

Family and friends will come together to share memories in support of each other at Titus Funeral Home from 2 p.m. to 7 p.m. Sunday, March 15. A service celebrating Mike’s life will take place at 10:30 a.m. Monday, March 16, in the funeral home. Lts. Esteban and Karen Pommier of The Salvation Army in Warsaw and Pastor Dennis Bollenbacher, chaplain at Mason Health and Rehabilitation Center, Warsaw, will officiate.

Entombment will take place in Warsaw’s Oakwood Cemetery at a later date.

The family has asked that gifts in Mike’s memory be given to The Salvation Army, 501 E. Arthur Street, Warsaw, IN 46580.