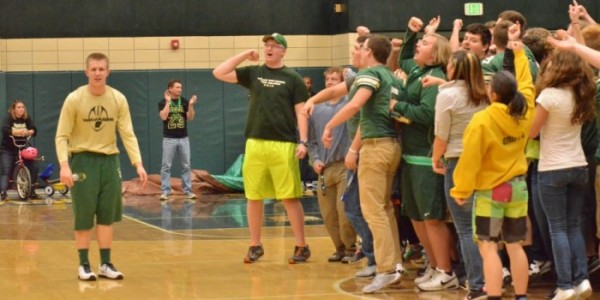 Alex Clark, on the far left, was one of four Wawasee High School students to plan and lead the pep rally in October during homecoming week.

“Student led” is more often becoming the norm at the high school. And it’s something Schmidt is particularly passionate about. “It’s part of my core values and principles,” he said. “I believe this is how students need to learn leadership. I saw what I didn’t get in high school. I just see school differently.”

Through the Warrior Leadership Committee, peer facilitators and several other student led groups, students are being given more of a voice and empowered to make changes. This has become reality in many ways including the annual Pow Wow Carnival and the pep rally during homecoming week in October, the first such rally in several years, which was essentially planned and led by four students.

The leadership committee has made its mark in organizing and leading community outreaches, among other activities. Peer facilitators have changed student behaviors by working with students struggling with academics. Schmidt noted in today’s world, students are more likely to listen to their peers and can be very suspicious of adult authority figures.

Schmidt, a former teacher and coach at the high school who came back to the school three years ago as the assistant principal, said he believes in the past students did not have much of a voice. “It’s like the old Pink Floyd song ‘Another Brick in the Wall,’” he said, adding it seemed students were more commonly treated as “statistics or numbers.”

With the approval of the school board and administrators, he began moving the school toward becoming more student led and student centered. “I want to empower students to have a voice and make changes,” he said. “I tell the students it’s really their high school and they can make an impact.” He added he wants students to feel valued, worthy and to know they can be successful in high school.

Moving the school in this direction has required fundamental changes in thinking and culture and the path has not always been smooth. He has emphasized to teachers to first focus on taking care of the physical, mental and emotional needs of students, then taking care of the academics. He admitted it has been tough for some teachers to embrace the shift in attitude, but many have.

Another major change has been allowing students to make changes to their class schedules, which previously was not allowed. Schmidt feels a high school student sometimes does not really know what they want to pursue as a career and will often change their mind. They should be allowed to make changes for valid reasons, he noted. Some did not feel comfortable with the change, but Schmidt believes it has benefited the students.

There are other skeptics, too. “It’s usually about respect,” he said. “There are some who feel when kids run a school, they don’t learn respect. And kids should be told what to do and do it. Change is a main issue. Some people just don’t like change.”

Others say “if it’s not broke, don’t fix it,” but Schmidt said, in fact, there were problems before because students were not valued and did not feel worthy.

Students are not just turned loose with no supervision and they have to prove they want to be leaders, he cautioned. Then they have to work and carry through their ideas to completion. Administrators and staff still provide guidance and sometimes tell them no, but now they will tell them why they say no.

Overall, though, Schmidt feels the school’s environment has changed for the better.