In front of a crowd of several hundred people, all staring at him with unwavering attention, Jeff Yalden delivered a bold, powerful and passionate speech that left nearly everyone in attendance visibly shaken.

Tippecanoe Valley High School has been through some trying times recently, and Yalden has made himself available to the school’s students and staff over the past few days before hosting Tuesday evening’s event for member of the community.

Yalden, who has made a career out of advocating against teen suicide, drew upon experiences from his own upbringing and from raising five daughters of his own to convey the importance of such areas as communication, responsibility and purpose in the life of a young person. Yalden’s unique combination confidence, humor, sincerity and sensitivity made it easy to understand why he is so sought after when it comes to dealing with such tough issues.

Yalden became visibly shaken at points during his speech while recounting moments from his own past, including a divorce from his wife that he attributes to his diagnosed bi-polar disorder and the final moments spent with the grandfather of his ex-wife, a man he was very close with. Several members of the audience were also moved to tears at various moments through out the speech.

Over the course of the nearly two hour long speech Yalden touched on a variety of very pertinent issues with high school students. He expressed his concern with the amount of time that kids spend now on social media. Yalden detailed how when kids see other people’s pictures or accounts, it can make them feel as though their own life is inadequate. He expressed that proper cell phone usage is a key element that often goes over-looked in parenting.

Yalden also continued to harp on the importance of purpose in a child’s life, particularly as they grow older. He was very clear that this does not mean that they should tune everything out as they move forward toward a singular goal, but that if they find something that they should truly love, that will provide them with something to come back to to get back on track when they are faced with moments of adversity. 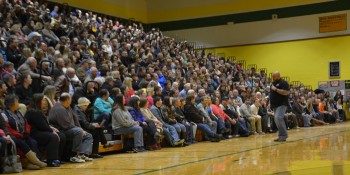 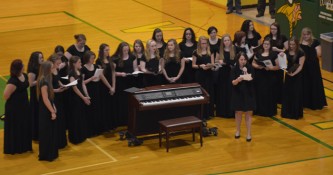 The Rochester High School choir gave a special performance for those in attendance. (Photo by Jarrett Van Meter) 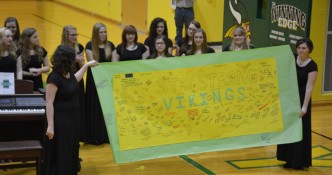 In a very kind gesture, members of the Rochester High School choir presented TVHS with a banner signed by every student and faculty member from RHS. (Photo by Jarrett Van Meter) 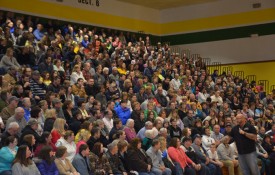 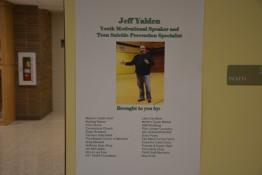 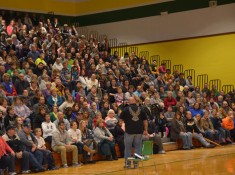