Hook-laden pop with a kaleidoscopic array of worldly influences, The Ragbirds exhibit a gleeful disregard for contemporary folk-rock convention.

With a new live album entitled We Belong To The Love released on Valentines Day 2013, this up-and-coming Michigan band has been traveling the country with their “infectious global groove” gathering a passionate grassroots fan base of all ages. 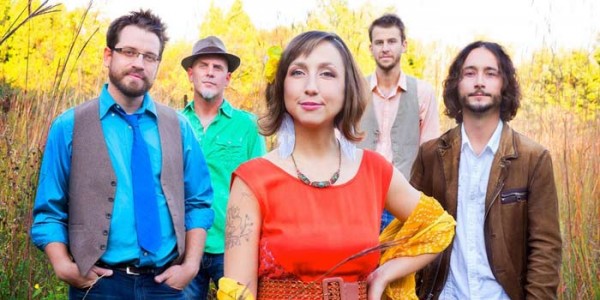 How do you capture the energy of a Ragbirds live show? The positive vibes, high energy, infectious beats, sweat fueled dance floors, and moving introspective lyrics? A tough task, but after seven years and nearly 150 shows a year, these far traveled road warriors were set to release the much requested live album. A release for the fans, The Ragbirds delivered with 12 songs recorded over two nights in September 2012 at rowdy shows in Grand Rapids, MI at The Pyramid Scheme and favorite hometown hangout The Blind Pig in Ann Arbor to capacity crowds. We Belong to the Love gave fans an early sneak peak at two unreleased new tracks “Lucky Rhythm” and “We Belong to the Love”.

The five-piece project is clearly built around the multi-talented Erin Zindle, who is proficient in a variety of stringed instruments. She is the songwriter and front woman of the band, skillfully switching between violin, mandolin, accordion, banjo and percussion, all while dancing. Zindle wears an infectious smile and a positive message, always spun through a poetic loom. Surrounding Zindle’s earthy-sweet voice is the whirlwind of a guitarist T.J. Zindle, dynamic bassist Dan Jones, drummer Jon Brown, and standout percussionist Randall Moore.

“It’s folk-rock music at the heart of it”, says Zindle, who started the band with her husband, percussionist Randall Moore, “but I’m influenced and moved by sounds from all over the world”. This interest in world music came first from her own roots. With two Irish grandmothers, the young violinist struck ancestral gold when she discovered Celtic fiddling as a teenager. At this same time the music of artists like Paul Simon, Rusted Root, and Peter Gabriel stirred up a deeper longing, bringing distant ethnic sounds into her small suburban Buffalo, NY bedroom. She began seeking out the source of these sounds and her love for travel and world music became a life-long passion. 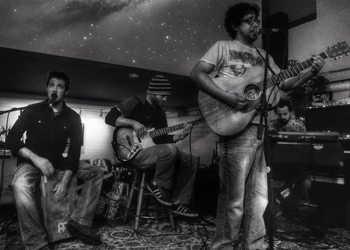 Alligator Blackbird’s music is derived from many influences across a diverse set of genres including folk, rock, pop, reggae, hip hop, and soul. Fusing acoustic guitar, bass, keyboard, ukulele, cajon, drums (and other percussion), along with vocal harmonies, and the dynamic/soulful voice of front man, Fabian Guzman, the band covers a broad range of musical ground.

Taking root in South Bend, Ind., in 2009 but branching out regionally throughout Indiana, Michigan, Illinois, and Wisconsin, the band has maintained a solid love affair with playing live to any audience that will hear them – big or small. Along with playing over 450 shows since inception, they have had the pleasure of opening up for a variety of amazing artists including Grammy nominee singer/songwriter Shawn Mullins, the electronic/funk duo Boombox, ska/reggae up and comers The Pinstripes, and reggae legends The Wailers.

Their first full length album came out in 2010 and was recorded as an acoustic trio with Fabian Guzman, Chris Keck, and Cory Miller. In 2011, the band added a fourth member, Kevin “Keyz” Krizmanich, who also plays for Midwest Hype out of Chicago, Ill. Their second full length album is scheduled for release in December 2014.

The concert starts at 7:30 p.m. Friday, Jan. 9. Tickets are $18 for general admission and $20 for reserved seating. Visit ignitionmusic.net for more information.