The names of the two officers involved in the shooting that occurred in Plymouth on Monday night have been released. (see related)

The incident took place at approximately 6:40 p.m. Monday, Dec. 29. Officers were dispatched to locate a subject who was wanted for questioning regarding a domestic battery case. The subject was reportedly driving a white van and possibly armed.

Ennis spotted the van shortly after the call and pulled it over in the parking lot of KMart near Oak Road and US 30 in Plymouth. Shortly after, Emenhiser arrived to assist.

Ennis and Emenhiser had a brief interaction with the driver of the van. Then, the driver, identified as Lane G. Dodson, 33, Tomahawk Drive, Plymouth, allegedly brandished a firearm, and the officers opened fire.

Neither officer was injured during the shooting. Dodson did sustain serious injury and was transported by helicopter to Memorial Hospital in South Bend. Memorial Hospital was unable to provide any new information on Dodson at time of posting.

Both Ennis and Emenhiser are currently on administrative leave with their respective departments. Ennis is stationed at the ISP Bremen Post in Marshall County and was appointed to the department in December 2007. Emenhiser has been with PPD since April 2013. The incident is still under investigation. 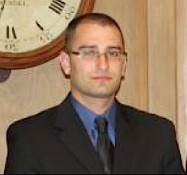