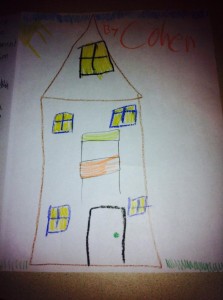 Cohen’s drawing of the house he wants to build in Haiti.

A local child has a dream of building a house. Cohen Heady, a seven-year-old who will be starting second grade at Eisenhower Elementary School this year, has been working on a project for nearly a year to build a house for a family in Haiti.

“My family has another family in Haiti that are near and dear to our hearts, the Alexis family,” says Sabrina Heady, Cohen’s mother. “My brother’s family has been able to give them some rice, my mom has given some of her clothes for Rosemaide, the mom in Haiti. My kids have drawn them pictures.”

Sabrina is president of a local organization called Haiti Hungry No More. The group provides school lunch programs and student sponsorships in Haiti.

“A couple of months ago we had an amazing sermon from our pastor, Tim, that talked the importance of giving,” Heady wrote on her Facebook wall in January. “This has spawned a reaction you could not believe, especially in Cohen. That Sunday we talked so much about different kinds of needs people have, whether it is food, heat, a home, using various examples. We didn’t realize the impact it was impressing on Cohen. The next day he came home, six years old, and ready to take on the world.”

The next day, Cohen drew a picture in school and wrote a note. “He wants to build the Alexis family a home,” wrote Heady.

The Alexis family are currently renting a home in Haiti, and 13 family members reside there. “It is a one bedroom style with curtains hanging up here and there to make a couple of more ‘rooms,'” Heady wrote.

Heady made copies of Cohen’s picture and note, and wrote a letter of her own. These copies were distributed around the Heady’s neighborhood.

“The response has been overwhelming,” says Heady. “To hear Cohen screaming with pride as he opened his first donation letter (of many) from his kindergarten teacher, is something I will never forget. He has been filled with this passion I’ve never seen him have before.” 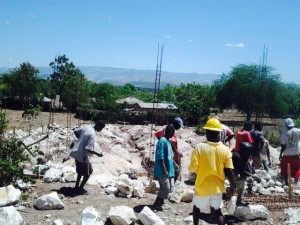 The Heady family has raised over $3,000 for the Alexis family’s new home. The Alexises started building their new home in February, but Heady says they still need approximately $7,000 more to complete it.

Anyone interested in donating to Cohen’s project, send donations to :