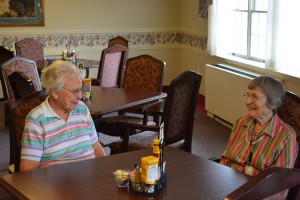 Mary Hoffman (left) and Ruth Ridgway both graduated from Mentone High School in 1934. Now, all these years later, the two are still good friends and dine together every day at Grace Village.

Mary Hoffman and Ruth Ridgway were both part of Mentone High School’s graduating class of 1934. The two were school pals.

“We spend our first grade at Mentone School, in an old brick building,” says Hoffman. “Our paths crossed again in eighth grade and we finished high school together.”

The two fondly recall hanging out at school and the occasional sleepover, where they often delighted in games of dominoes. “Those are some fond memories,” says Hoffman.

The two women were a little different than each other. “At school, I was out at recess, having a good time. She was sitting at her desk reading,” recalls Hoffman.

Ridgway admits to being a bit of a book worm. She won $5 at graduation for having the best grades in the class of 34. “I’ll stack up my grammar to anybody’s,” she says.

After graduation, Hoffman and Ridgway went their separate ways. Hoffman stayed in Kosciusko County, married Howard Hoffman. “We were farmers,” she says.

Ridgway moved to Kokomo and stayed with an aunt and uncle while she attended a business school. Eventually, she married Thurman Ridgway. The two lived in various parts of Indiana, including South Bend and Indianapolis.

“I kept occasional contact with her,” says Ridgway. Hoffman says, through the years, the two always corresponded at Christmas time.

“I went to see her a time or two,” remembers Ridgway. “I think the only time I’d see her was when I was back in town.”

The two ladies carried on with their lives over the years. Each had one son – Stephen Ridgway and Miles Hoffman, respectively. Hoffman eventually retired from farming and working as a postal clerk in Silver Lake. Ridgway moved back to Kosciusko County to be close to family.

Their paths would cross again in retirement, at Grace Village in Winona Lake. “It was just happenstance that we ended up right here together,” says Ridgway.

“We both lived in retirement for awhile before we came to assisted living,” says Hoffman. “Now we eat at the same table for our meals,” says Ridgway.

The two swap stories about their school days. “Our most interesting conversations are about our school days at Mentone,” says Hoffman. “We can talk long about the different classmen.”

Sometimes they just say hello, and Ridgway reads the newspaper, but they’re happy to have one another around.

“It doesn’t happen very often,” says Hoffman. “That two people start out like that in school and end up together.”

[Editor: this article originally appeared in our sister publication “Senior Life,” which can be picked up on newsstands all over Kosciusko County at the beginning of each month.]