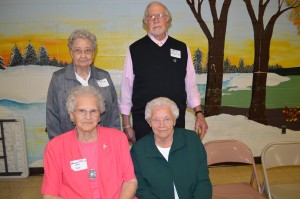 Attending the Milford High School Alumni Banquet from the Class of 1944 were, in front from left, Glennis Orn Stump and Mary Hummel Wolford. In back are Joan Good Ganger and Harley Stieglitz.

Though the high school was closed after the 1967-68 school year, memories are still alive and well. Many of those memories of a small town high school were shared during the annual Milford High School Alumni Association Banquet Saturday evening in the cafeteria of Milford Middle School.

After a social hour and dinner catered by Penguin Point, Bill Troup, 1962 Milford graduate and chairman of the alumni association, conducted a short business meeting. Joe Judkins, 1963 graduate living in Michigan, was the guest speaker. Before retiring Judkins worked in a mechanics related career that included training young people in the tool and die making trade.

He first became interested in mechanical things because his dad worked at a Ford automobile garage in the evenings after teaching school during the day. Then Judkins’ dad found a 1954 Pontiac and father and son rebuilt the engine. “I loved that car,” Judkins said, noting it was his first car.

After graduating from Milford in 1963, Judkins at first said he wanted no part of college and went to work for Chore-Time in Milford. But after seeing a horrible accident one day he changed his mind and later his father found a machine tool program at Ferris State University in Michigan. Judkins continued to develop his understanding of mechanical things and after finishing at Ferris State, later attended Indiana State University to earn a master’s degree.

Judkins read the names of each of the Milford graduates who had passed away since the 2013 reunion. A total of 14 died ranging from the class of 1933 to 1967.

Guest speakers for each of the honored classes of 1944, 1954 and 1964 then shared more memories. Glennis Stump, representing 1944, said “it just can’t be 70 years” since graduation. She said probably the worst thing that happened during her senior year in high school was the class play. “The boys all acted up, but not the girls, we were all good,” she said. The play director became frustrated and walked out, but later came back and everything worked out well.

John Hurd spoke for 1954 and recalled an eighth grade science class experiment with static electricity where he touched a classmate and “it caused a ball of fire.” Representing 1964 was Earleen Fisher and she shared several notable events to include The Beatles coming to America, the assassination of President Kennedy in the fall of 1963 and the Vietnam War.

Class members shared memories including two no-hitters being pitched in baseball, the senior class trip to Washington, D.C., and riding a fan bus to a sectional basketball game in Columbia City during a night when by the time the bus returned, the state police would not let anyone leave Milford because of the inclement weather.

Ron Baumgartner, a Milford graduate and publisher of The Mail-Journal, shared his experiences of being named this year’s senior king for Milford Fest. He recalled many of the businesses located along Main Street in Milford when the high school was still open are no longer operating.

To close out the evening, Troup noted next year’s alumni gathering will be held June 13.

Class of 1944: In front, from left, Glennis Orn Stump and Mary Hummel Wolford. In back are Joan Good Ganger and Harley Stieglitz.