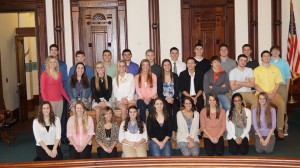 The KYLA class was asked to conduct community service projects, called Project Proud, in the community throughout the school year. Moderator Tony Ciriello said the students had the most unique projects KYLA has ever had and none were the same. “You kids are the best of the best,” he added, noting there are nine traits that make a great leader.

KYLA president Christi Price noted, “We feel our leaders are here, and we hope it was a positive experience.”

Four students gave presentations on their projects. Three students from Wawasee High School gave a presentation on the Special Olympics basketball team they helped. Justin Ciriello, Courtney Linnemeier and Jada Antonides completed 62 service hours, starting Nov. 10. On Jan. 10, at the Wawasee-NorthWood basketball game, they raised $1,385.51 from a raffle using donated items, such as a TV. The money will support Special Olympics. They also attended basketball practices at Grace College. 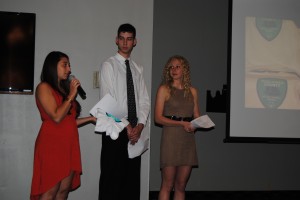 From left, Wawasee High School students Jada Antonides, Justin Ciriello and Courtney Linnemeier gave a presentation on their Project Proud May 7 at the Kosciusko Youth Leadership Academy banquet in Warsaw. They helped coach a Special Olympics basketball team this year.

The three said they learned valuable skills while helping the team. Ciriello said he learned how to interact with the players. He helped coach the players, while Antonides helped to watch one particular player named Amy. Antonides said the experience allowed her to “go out of her comfort zone.” Linnemeier said the experience expanded her leadership skills. Linnemier will also help coach players at the Special Olympics games in Terre Haute this summer.

The students said they didn’t spend a lot on expenses other than driving. They also played video clips from the basketball game Jan. 10.

The next presenter was Tenaya Shull, a Tippecanoe Valley High School student. She gave a presentation on her project, to bring awareness to Riley Children Hospital in Indianapolis. She videotaped three Kosciusko County parents who had been affected by Riley and whose children received medical treatment at Riley for certain medical conditions.

Last year, Shull said 1,000 families from Kosciusko County went to Riley. Some used the Ronald McDonald House, which allows parents to use the facility to stay overnight while children are receiving medical treatments. There are 52 rooms now and they are 99 percent full most days, Shull said.

Afterward, diplomas were presented. Next, Shull and Jacob Reynolds, a Warsaw Community High School student, were selected to serve as at-large members on the KYLA board next year.