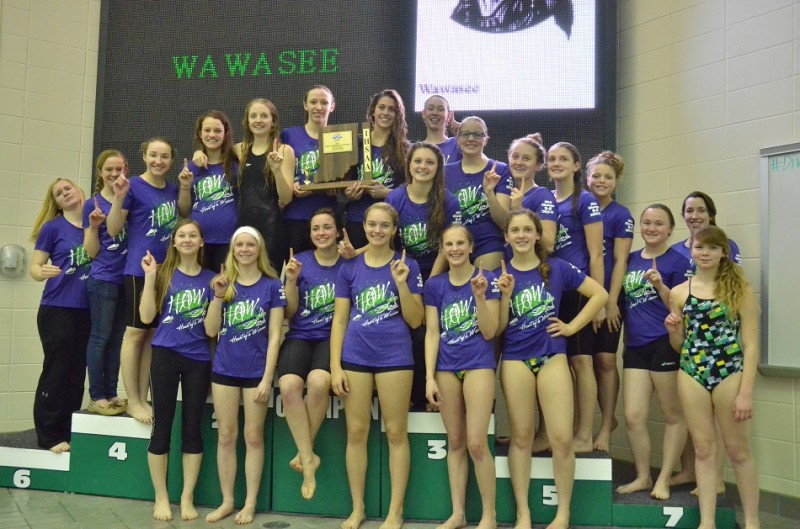 Wawasee won the 2014 Concord Sectional with a score of 410. It is the program’s first sectional title since 1999. (Photos by Nick Goralczyk)

DUNLAP – Nearly a month ago the Wawasee girls swim team turned heads by beating perennial swimming powerhouse Northridge twice in a five day span, capping a perfect 9-0 season. 21 days later, the anticipation and excitement for the third and final meeting of these two teams reached it pinnacle.

Wawasee rose above the pressure and nerves that seemed to be so prevalent Saturday afternoon at the Concord Sectional and scored 410 points, completing the sweep of its bitter rival, Northridge (370), and claiming the program’s first sectional title since 1999.

Click here to see a video of Hannah Rhoades ‘ second dive on Saturday.

Following the diving portion of the meet, Bre Robinson followed in Miller’s footsteps and started her day out with a win. Robinson separated herself from the pack early in the 100 fly and would finish comfortably in first with a time of 54.60. Wawasee’s Mikala Mawhorter (1:02.24) added a fourth place finish for the Warriors in the event.

Through six events Wawasee trailed Northridge, 192-168. Wawasee then found itself in a dead heat with the Raiders, 205-205 just a short time later after Kayla Hershberger (54.41) and Kendra Miller (56.26) took second and sixth place in the 100 free, respectively. Wawasee put the hammer down from there on out winning four of the final five events.

Paige Miller got the winning streak going for her team as she went head-to-head with Northridge’s Katie Hughes for the duration of the 500 free. The event that is always the longest, and sometimes least dramatic, event of the day suddenly became the most intense moment of the meet. Miller, behind a chorus of cheers from the Warrior faithful, pulled away from her freshman counterpart on the final lap and clocked a 5:00.24, breaking her own school record. This was third time Miller and Huges went head-to-head in the event this season and for the third time, Miller reigned supreme.

Paige’s winning ways continued in the very next event as she joined her sister, Kendra, and teammates Mawhorter and Robinson in taking first place in the 200 free relay with a time of 1:38.23.

Following the relay win, Wawasee took the lead 282-279 over Northridge, and never gave it back. Robinson picked up a third consecutive victory for the Warriors as she won the 100 backstroke in record time. Robinson swam a 54.65, breaking her sister Brittany’s pool, meet and school record of 56.17, set in 2012.

When asked about breaking her sister’s record, Robinson made it clear that there is no sibling rivalry in her family.

“I was excited about the time, not so much about her record,” Robinson said. Then the Warrior junior smiled, laughed and jokingly added, “I guess I feel a little guilty!”

In the final event of the night, the 400 free relay, Wawasee stayed true to form one last time, taking first place and setting yet another record. The relay team made up of Hershberger, Robinson and both Millers, started strong and finished stronger. The group finished at 3:34.15, breaking the previous pool, meet and school record set by Wawasee’s 2012 relay team.

Following the 400 relay, scores were announced and Wawasee’s win became official, capping a memorable season for the team. Winning sectional and beating Northridge had to go hand in hand, Robinson knew that, but keeping Northridge out of sight and out of mind was a task that was easier said than done for the 2014 Sectional Coach of the Year.

“It’s hard to not look at Northridge,” stated Robinson. “When there are comments from them about us being ‘the hunted’, it makes it difficult not to look at that.

“I try hard to have the girls focus on their own jobs, their own races. But when you get those little comments, it’s always kind of nice to say that when it came right down to it, to ability, you take the suits and everything else out of the equation, our girls still won.”

With only qualifiers moving on to next week’s State Finals, Robinson was able to put the season into perspective.

“It’s just kind of a surreal moment,” Robinson said. “I’ve learned that this is a journey. This is kind of the end result, but the journey was great with these kids. Spending the entire season with them, they all worked so hard and the journey to get here was the best part.”

While the journey is over from a team standpoint, Robinson, Mawhorter, Hershberger, and Paige and Kendra Miller will move on to the State Finals as either an individual or as part of a relay team. IHSAA State Prelims are Friday night with State Finals taking place Saturday at IUPUI.

The girls stayed true to tradition by jumping into the pool following their victory. Thankfully for Wawasee, treading water was not an event in the sectional finals. (Photos by Nick Goralczyk)

Mikala Mawhorter (left) and Caitlin Clevenger (right) took a moment to pose for the camera during a warmup on Saturday.

It took some coaxing from her team, but Wawasee head coach Julie Robinson finally took a moment to stand on the podium with the sectional trophy. Robinson was named the Sectional Coach of the Year. (Photos by Nick Goralczyk)

Paige Miller does the backstroke during her record-breaking 200 IM performance.

The Wawasee crowd erupts as Warrior freshman Paige Miller pulls ahead of Northridge’s Katie Hughes during the final stretch of the 500 free. (Photos by Nick Goralczyk)

Bre Robinson flies down the lane during the 100 butterfly. Robinson won the event with a time of 54.60.

Bre and Julie Robinson pose with the sectional trophy after Saturday’s thrilling win.

The Wawasee 400 free relay team (center) squeezes on to the podium after breaking the previous record held by the 2012 Wawasee relay team.