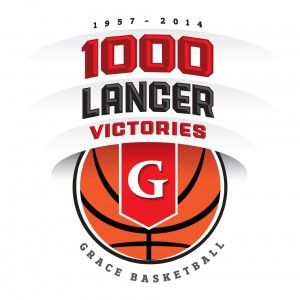 The Lancers (12-8; 4-5 Crossroads League) picked up their fourth-straight league victory, wrapping up the first half of the CL season with a 4-5 record.

The first half was action-packed from start to finish as the teams combined for 84 points before halftime.

Grace led by double figures twice in the opening half, but the Cougars’ strong shooting (56 percent) helped Mt. Vernon trail by just six at the halftime break, 45-39.

The Cougars (4-16; 1-8 CL) cut Grace’s cushion to four early in the second half. But Grace ripped off eight straight points, sparked by four points from Caleb Featherston, to take control of the game for good.

Grace led by double digits for much of the second half, eventually building up its margin to 20 points. The Cougars started sending the Lancers to the foul line with several minutes remaining in an attempt to extend the game, but Grace made 15 free throws in the second half to pull away for the historic victory.

As a team Grace outrebounded Mt. Vernon 36-25. The Lancers also notched an assist on 19 of their 30 made field goals.

The Lancers’ next contest is a home game on Saturday. Grace will host Taylor at the Manahan Orthopaedic Capital Center at 3 p.m. to kick off the second half of the Crossroads League schedule.