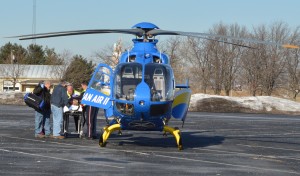 A 10-13 year-old male was airlifted to Lutheran Hospital, Fort Wayne, after falling in the hay loft on a farm east of Milford. (Photo by Deb Patterson)

A 10-13 year-old male was airlifted by Lutheran Air Ambulance this afternoon from Milford after a fall in a barn.

Milford Fire Department was called at approximately 1:30 p.m. to a location on CR 1250N, between CR 200W and CR 300W for a lift assist with Multi-Township Paramedics. The youth allegedly fell several feet inside a barn.

According to one of the firefighters at the scene the youth was in a hay loft when he fell. Firefighters lowered the young man from the loft to the waiting ambulance, which transported him to Lutheran Air. The helicopter landed in the parking lot of Brock Manufacturing on the north edge of Milford.

According to scanner traffic the youth suffered tibia and fibula fractures (the two main bones of the lower leg). The youth is reportedly not from the Milford area.