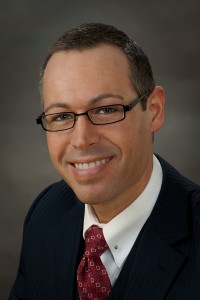 Attorney Chad M. Miner has announced his candidacy for Judge of Superior Court 1. Currently Judge Duane Huffer will be retiring and not seeking re-election.

Miner is a lifelong resident of Kosciusko County.  Originally from Pierceton, he currently lives in Silver Lake with his wife, Rachel, and works in Warsaw at Miner & Lemon LLP.

His family has served Kosciusko County for three generations. Miner himself has served as precinct committeeman for Lake 2 and Jackson 1 and he currently serves as Silver Lake Town Council president. His father, Michael L. Miner, was prosecuting attorney from 1979 to 1990, and was GOP county chairman from 1993 to 2001. His grandfather, R. Lloyd Miner, was township trustee for Washington Township for a number of years.

Miner has shown great interest in local affairs and has found his time on the town council to have been particularly enjoyable. He believes that it has given him a deeper understanding of the issues confronting our citizens and local government, along with affording him the opportunity to help make our community an even better place to live.

Miner’s legal experience encompasses a variety of areas of the law, including civil litigation, estate planning and administration, business planning and family law matters. He also serves as the assistant county attorney and presides frequently as Judge Pro Tem for Superior Court III.

In addition to his legal training, Miner has received a master’s degree in business administration from Indiana University at IPFW. He believes that as a result of his education and experience, he has the ability to approach legal issues in a thoughtful manner and with a problem-solving perspective.  Also, Miner believes that a dedication to the principles of justice and fairness and a calm and sensible demeanor, along with the necessary legal reasoning abilities, are among the most important characteristics for an effective judge, and he stands ready to bring these qualities to the office.