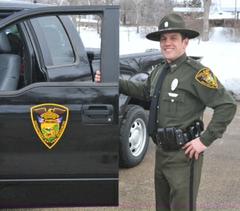 Indiana Conservation Officers of Operational District One which serves the north central part of the state want to congratulate officer Jon Cook for receiving the 2013 district officer of the year award as voted on by his peers.

Officer Cook is assigned currently to Fulton County after a recent voluntary transfer from Kosciusko County. Officer Cook is thereby eligible to receive the ultimate award which can be bestowed upon an Indiana Conservation Officer by the Law Enforcement Division which is the state Pitzer officer of the year award.

This is officer Cook’s second time receiving the district one officer of the year award. Officer Cook began his career in 2006 and has demonstrated a high level of dedication to serving the citizens of Indiana in a professional and courteous manner. Officer Cook has been active in countless community activities in 2013 which directly reflect Indiana Conservation Officers devotion to education, service, and enforcement.

Officer Cook certified nearly 400 students in 2013 in hunter and boater education classes. He also was camp director of the Camp Mollenhour Conservation Camp, instructed National Archery in the Schools Program, assisted with the Warsaw, Indiana urban zone deer reduction hunts by instructing the hunters on safety and ethics, and was selected as the 2013 district one hunter education instructor of the year by his supervisors. Officer Cook is also a defensive tactics instructor and passenger boat for hire inspector.

Lt. John Karris commented on Officer Cook’s selection,“Officer Cook’s efforts toward professional law enforcement and community support activities exemplify the qualities of an outstanding State Conservation Officer. Jon understands the efforts, we as officers, put toward these qualities to build quality and lasting relationships with sportsmen and women and civic based organizations. Through these efforts Jon has become a very well known officer in his community garnering accolades from civic groups and enforcement agencies.”

Officer Cook expressed his view of his duty as an Indiana Conservation Officer, “I feel our job is a tool to emphasize, teach, encourage and protect moral and ethical values towards our natural resources. We are the leaders of today. We are in the driver’s seat to make change in a positive way.” Officer Cook has proven to be a great steward of our natural resources as well as a leader in his community for sportsmen and women to emulate, look up to, and count on when he is called upon to serve.