A Warsaw Community High School sophomore accused of yelling at and pouring a bottle of water on a middle school girl on the bus ride home is being punished, but the mother of the victim said the punishment falls far short of the school’s own disciplinary requirements. “No wonder bullying is such a huge issue,” she said. “Even those in charge dismiss it.”

The incident in question happened on Bus 95 at the end of the school day one day last week. In the video, the WCHS sophomore accuses the middle school girl of saying something to her and then opens a bottle of water and pours it over the 13-year-old’s head.

As the sophomore girl walks to the front of the bus, she is told by the driver to go apologize. The girl refused, only defending her actions by telling the bus driver, “She deserves it! Do you not hear what she says to me every time I get off the bus?” He said he had not heard any remarks but said he should be told instead of the students taking revenge out on each other. The girl stood her ground though saying, “No, I don’t want to apologize. She deserves it.” 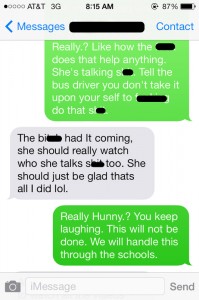 The sister of the victim sent texts to the accused bully. The girl’s response, according to the victim’s mother, is proof the girl is not sorry for actions.

After the incident, the victim’s sister texted the accused bully who responded, “The b**** had it coming, she should really watch who she talks s*** too. She should just be glad that’s all I did lol.”

The mother of the 13-year-old victim is not only appalled at her daughter’s bully, she is disturbed that the school did not take the act more seriously. She said school personnel were seemingly unconcerned that the attack on her daughter happened and that it appeared to be premeditated.

At approximately 54 seconds into the video, the perpetrator is heard again when she first approached the girl. “Other girls videoed it on their phones, too,” said the mother, explaining the additional audio. “They knew what she was going to do and had their phones ready, but they aren’t in trouble.”

Without ever receiving a return phone call from WCHS School Resource Officer Dave Morales, the mother brought the video of her daughter being bullied to StaceyPageOnline.com asking that other parents begin to ask questions of what happens on their own children’s buses.

Warsaw Community High School Principal Troy Akers told us the sophomore girl has been disciplined, which did include a bus suspension, but due to school policies he cannot reveal what the exact consequences were. The middle schooler’s mother, however, said the accused bully was suspended from school for the rest of this week and will be able to return to classes Monday, a punishment she said does not follow the corporation’s policy.

“She’s only being punished for two days since school is out Wednesday, Thursday and Friday for fall break,” the victim’s mother explained. “And she isn’t taking it serious! It’s two freaking days, that’s a slap on the wrist.”

According to Section 5517.01 of the corporation’s bylaws and policies, “bullying” includes physical, verbal and psychological abuse: “The Board will not tolerate any gestures, comments, threats, or actions which cause or threaten to cause bodily harm or personal degradation.”

Per the WCS guidelines, acts of fighting, intimidation and threats made to students and/or staff constitutes 10 days of out of school suspension, police must be notified and a request for expulsion is filed. The victim’s mother says the discipline did not follow protocol and she is also concerned because the two other girls who videoed the incident were not punished.

The alleged bully also seemingly violated two rules in the student discipline policies. The first is that she clearly “committed an act of defiance against (a) staff member,” in this case the bus driver, and “failed to observe the reasonable and specific written or verbal direction of school authorities.” The girl adamantly disobeys the bus driver who repeatedly told her to apologize to the victim.

Akers said the school corporation’s disciplinary policy is a guideline and “not an absolute,” but he said he has since learned more about the incident, including the additional cell phone videos that were taken. He plans to watch the video from the bus and “dig deeper to see if the consequences fit the crime.” Akers added, “What’s more irritating to me is that we just spent a week at the high school talking about bullying … it’s like it went in one ear and out the other.”

The incident on Bus 95 happened over the middle school girl’s alleged name-calling of the high school student that had gone on for some time. Akers noted that, if that is the case, that also constitutes as bullying and would be addressed.

Akers insisted the entire administration and staff of WCS do take bullying seriously and, because this particular incident does qualify as bullying, a complete report will be filed and further investigation will take place.