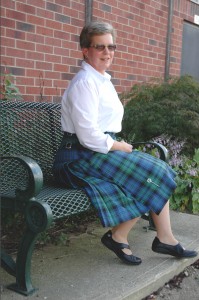 Edith Rohrer, family and consumer sciences teacher at Warsaw’s Edgewood Middle School, received a Lilly Endowment Teacher Creativity Grant to head to Scotland this past summer. Rohrer attended a workshop at Keith Kilt and Textile Centre, making her own kilt out of four meters of wool tartan fabric.

It was cats that brought Edith Rohrer to Scotland last summer, but it was kilts that sent her back this summer.

Rohrer, family and consumer sciences teacher at Warsaw’s Edgewood Middle School, happened to become acquainted with a woman in Scotland who also owned Bengal cats. Visiting her two summers ago, Rohrer became enthralled with the country, which is no bigger than the state of Indiana.

With the desire to revisit Scotland, as well as delve deeper into her passion for sewing, Rohrer tried her luck on getting a Lilly Endowment Teacher Creativity Grant. Happily, her proposal was accepted and she headed to kilt school and what she says was a life-changing summer.

“Sewing is my passion, but I sadly don’t get to teach it much at school anymore,” explained Rohrer. “Nowadays, students only learn to sew on a button.”

When researching sewing in Scotland, Rohrer learned about the art of kilt making. The only nationally recognized vocational school to teach the trade is Keith Kilt and Textile Centre located in northern Scotland. The centre is also regularly commissioned to create unique and beautiful tartan patterns, or what Americans would call “plaid.”

Creating a kilt “is really an art form,” said Rohrer, who took a 10-day beginner class as well as sewed outside of class to complete her hand-stitched kilt.

“I really didn’t do anything but sew for hours and hours.”

Rohrer used 8 meters (approximately 26 feet) of “worsted” wool to complete her kilt. Worsted wool is high quality and made of the largest, softest fibers from the sheep. Finished, her kilt weighs four pounds and includes 33 hand sewn pleats. Because it is custom-fit, it is extremely comfortable, she says.

“There was zero tolerance for error, and almost no fabric was wasted,” said Rohrer. “Extreme accuracy was needed to sew the pleats across the back and have the lines of the tartan match perfectly.”

Ladies’ kilts are made the same way as men’s kilts, but women get to choose the length while men’s kilts always end mid-knee. Since her heritage does not include Scottish, Rohrer was able to choose from any of the family tartan patterns. She choose Lorne Ancient.

While the sewing was intense, Rohrer says the most intense part of the trip was understanding the Scottish dialects. Although English was spoken, it was quite different than American English.

“It really turned into an English as a second language trip, too,” said Rohrer. “There were so many words and pronunciations I just didn’t understand. I was constantly saying, ‘What?’ Thankfully, I worked with some really nice people who were understanding.”

Rohrer’s favorite undecipherable Scottish sentence? “Pensioner pushing a zimmer,” she said, “which translates to ‘an elderly person pushing a walker.’

“I wondered if this ‘zimmer’ has any relationship to our Zimmer orthopedic company here in Warsaw? There were so many words I had to learn.”

Rohrer will present a program, “An American at Kilt School” at the Warsaw Public Library 6:30 p.m. to 7:30 p.m. Tuesday, Oct. 15, where she will share her experience with Scottish culture, tartan fabric, sewing and talking with the people.

“I owe friends a great big thank you for encouraging me to do this and helping me with the application process,” she concluded. “I am thankful for the Scottish people who welcomed me and to Lilly for this grant.”