Although it was hot enough for most area schools to cancel outdoor sporting events Tuesday afternoon, goosebumps were plentiful at Lakeview Middle School’s football field where a special young man was granted his wish to run a touchdown.

Jacob Brock, 13, suffers from multiple disabilities including cerebral palsy, autism, a mild mental disability and facial dysplasia. His life skills teacher, Tiffany Alberts, known as Mrs. A., says, “Jacob is a silly, funny, exciting little boy. He’s very independent. Even if he can’t do it, he’s going to try to do it.” 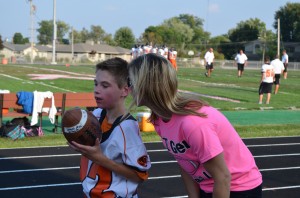 Among the things Jacob loves is sports, especially football. However, his disabilities prevent him from taking part in any competitive athletics. “He can hit a ball, kick a ball, run with ball. Anything sports related he loves,” adds Alberts, who came up with the idea to have Jacob be a part of the special Pink Out football game between Lakeview and Edgewood middle schools.

“Jacob isn’t going to get the opportunity to run in a normal football game like a lot of typical kids can. I just thought it would be something he would really enjoy and remember. I just wanted him to have a shot.”

Jacob’s parents, Jeremy and Charity Brock, fully credit Mrs. A for arranging the special moment. “She’s just awesome! She knows he loves to play sport,” Charity says of her son’s teacher. “At home all the time he carries a ball around, throws it, kicks it. He doesn’t care if he has anyone to play with him. Throws it, goes and gets it, does it again. He just loves to play.” 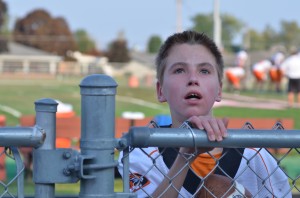 Jacob had surgery last year on his legs to prolong his ability to walk and run, but Charity says the fix is only temporary. “It helped to improve his childhood a little so he could play better, run better … but (the doctor) said that’s not permanent. It will last maybe 10 years.”

With the blessing of the Warsaw Community Schools administration and coaches for both middle school football teams, Jacob took the field on the 30-yard line with his beloved Lakeview Middle School Tigers and their opponents. Both teams followed through with a play, handing the ball to Jacob who, with his teammates “blocking” for him, ran for a touchdown.

There was not a smile bigger in the entire crowd, than the one on Jacob’s face.

I, personally, want to thank Lakeview Middle School for contacting me to be a part of this amazing event. It is proof that great things happen in Warsaw everyday, we only need to open our eyes to see them. Warsaw Tigers of Lakeview and Edgewood schools, you are all heroes to one special young man.