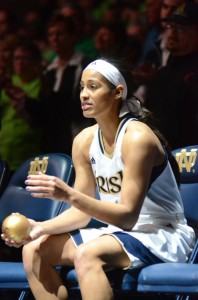 Skylar Diggins has played her fair share of games in Indianapolis throughout her brilliant basketball career.

She will play her first hoops contest though as a professional in the Circle City come Friday night.

Diggins will return to the Hoosier State to lead her Tulsa Shock versus the Indiana Fever in Bankers Life Fieldhouse. Tip-off is scheduled for 7 p.m.

Diggins is in her rookie season with the Shock after a stellar collegiate career at Notre Dame. The southpaw guard led the Irish to a 35-2 mark her senior season, which ended with a loss to eventual national champion UConn in the Final Four in April. Diggins was then selected by the Shock on April 15 as the third overall pick in the WNBA Draft behind top choice Brittney Griner and Elena Delle Donne.

Diggins earned All-American honors for the fourth time her senior season, the second straight as a consensus selection, in South Bend. The 5-9 point guard averaged a team-high 17.1 points-per-game and a team-best 6.1 assists per contest to go with 3.1 steals and 3.5 rebounds per game.

Diggins led Notre Dame to back-to-back runner-up finishes in the NCAA Tournament in both 2011 and 2012. The Irish lost to Texas A & M in the 2011 tournament title game played at Conseco Fieldhouse (now known as Bankers Life Fieldhouse). The Irish lost to Griner and Baylor in the 2012 national championship game. Diggins posted a 130-20 mark at Notre Dame and holds or shares 32 program records, including most points in a career with 2,357 and most steals in a career with 381.

Diggins also played in the former Conseco Fieldhouse in three state championship games while a star at South Bend Washington High School. She led the Panthers to a Class 4-A state championship as a sophomore in 2007. Diggins’ Washington teams were state runner-up three other times, including her senior year in 2009 when they lost 71-69 to Indianapolis Ben Davis in the Class 4-A state tournament finale in Lucas Oil Stadium in Indianapolis. Diggins, who was the National Player of the Year and Miss Basketball her senior season in 2009, led Washington to a 102-7 record during her prolific prep career.

The Shock are off to a 3-8 start this season. Diggins has started all 11 games and is averaging 10.1 points and a team-high 5.3 assists per game. She has struggled with her shooting, hitting on .309 overall from the field and just .185 on 3-point attempts. Diggins is averaging 31.6 minutes per game and shooting .844 from the free throw line. She had nine points and 11 assists in Tulsa’s last game, an 88-79 loss at Minnesota Sunday  night.

Indiana, the defending WNBA champions, has struggled through an injury-filled campaign so far in 2013. The Fever dropped to 1-7 Tuesday with its seventh straight loss, a 76-60 setback at Atlanta. Indiana’s seven game losing streak is its longest since its first season in 2000. The Fever had just eight players available Tuesday at Atlanta. Indiana was without Tamika Catchings for the second straight game and Katie Douglas for the sixth straight as both are sidelined due to back injuries. Catchings starred at Tennessee and was the 2011 WNBA MVP, while Douglas is a five-time All-Star who played at Purdue.

Diggins has been a hometown hero since day one of her freshman year at Washington. Twelve busloads of fans made the trip to Chicago to see her and the Shock play on June 2. Diggins held a Q & A session following the contest with several hundred fans and is expected to do the same this Friday night in Indianapolis.

The Shock has a pair of upcoming games scheduled for national television. Tulsa will be shown on ESPN2 July 2 at Connecticut at 8 p.m. and again on July 11 versus Los Angeles at 9 p.m.