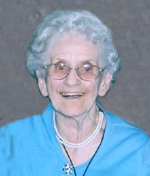 Bethelene Jewell Norris, 93, formerly of South Whitley, Ind., passed away at 9:50 a.m. Saturday, June 15, 2013, at The Hearth of Sycamore Village, Fort Wayne, Ind., where she was a resident for the past year.

She was born Nov. 23, 1919, in Whitley County, Ind., a daughter of the late Walter and Edna (Fox) Knisely. Her formative years were spent in the Larwill and South Whitley area. On Nov. 8, 1947, she was united in marriage to Garland E. Norris. They made their home in South Whitley. Mr. Norris preceded her in death.

She was a waitress at the former Scott’s Restaurant in South Whitley and also assisted her husband at his automobile dealership, United Auto Sales.

She is survived by several nieces and nephews.

She was preceded in death by three sisters: Herma Knisely, Joy Putt and Evelyn Kirkeleit.

Memorial contributions may be directed to Heartland Hospice.