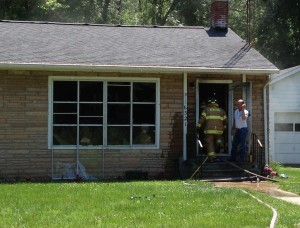 Firefighters quickly contained a fire at a rural Warsaw home Tuesday afternoon that was set by the homeowner’s son. (Photo by Stacey Page)

A family feud led to a house fire Tuesday afternoon in rural Warsaw and landed one man in jail.

As we first reported, a fire at 6321 W. 100 N., Warsaw, was called in to Kosciusko County Central Dispatch at about 2:05 p.m. by a passerby. Neighbors said a mail carrier noticed smoke coming from the home, called 911 and alerted them, asking if anyone was home.

Homeowners Richard and Sherry Martin were not at home when the fire started and, at the scene, a fight erupted between James Osborne Jr., age unknown, and Richard Martin. As StaceyPageOnline.com witnessed, Richard Martin pulled up to the scene in a passenger car. Osborne then ran up to the vehicle and began punching Martin through the driver’s side window until firefighters intervened. 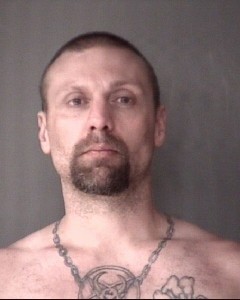 Gordon Baker, fire investigator with Squad 70, said Osborne is Sherry Martin’s son and was angry from an altercation earlier in the day. According to Baker, Osborne admitted to setting the fire in retaliation, but refused to say how he started it.

“The fire was contained to two areas in the living room and was started using ordinary combustibles … basically papers and whatever else he could find that would burn,” said Baker.

Atwood Fire Department, which responded to the scene, quickly contained the fire to the living room, but it did result in heavy smoke damage throughout the residence. Osborne was arrested, but it’s not yet clear what he is being charged with.

The Kosciusko County Chapter of the American Red Cross provided the Martins with shelter assistance.

This morning, the Kosciusko County Sheriff’s Department released information on Osborne’s arrest noting, “Osborne, who resides at the residence, had become disgruntled with his family members and proceeded to ignite the residence on fire after they left.”

Several individuals called 911 regarding the house fire as well as the physical fight involving Osborne and a neighboring family member. Osborne was last arrested in June of 2011 for resisting/fleeing law enforcement, possession of a controlled substance, public intoxication and probation violation. He was subsequently sentenced to the Indiana Department of Corrections in June of 2011 and released in August 2012.

Officers who took Osborne into custody said he immediately admitted to setting the residence on fire and wanted to “return to prison.”

Osborne was preliminarily arrested on a felony charge of arson. He is currently being held on a $10,000 bond in the Kosciusko County Jail.