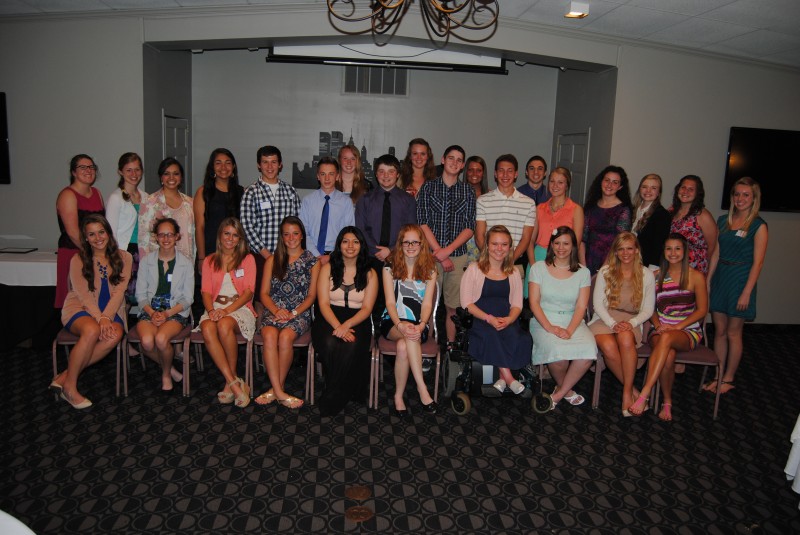 Carl Lauster, KYLA president, said each student was required to donate a minimum of 10 hours of community service work on a project of his or her choice. However, he said, students’ projects exceeded 80 to 100 hours, in some cases, per person. He said they are now part of an elite group of 570 graduates who have completed the program in the past 19 years. The projects went directly back into the community to help people in need or develop new programs for the general public.

This year, a KYLA project started two years ago by two KYLA students has been expanded, Lauster noted. The “Backpack Boomerang” program has expanded within the Warsaw Community School system.

Another program, the Clothes Closet at Warsaw Community High School, was expanded this year into Lakeview Middle School by one of the current KYLA students. The clothing closet provides clothing to needy students.

Lauster said he was proud of all the students’ efforts that have raised funds to help local charities and organizations. “I’m equally as proud of our students who chose to do their service projects, which did not include fundraising,” he said.

This year, two students were chosen to present their projects at graduation — Ashlyn Vitoux and Mary Catherine Mayer.

Vitoux’s project is called “Client Choice, Healthy Choice Food Pantry.” The new food pantry addition started at Combined Community Services on March 13. Clients can now pick the food, rather than be given, that they want, including healthy food, by using shopping carts that were donated. She raised $26,425 for CCS from private donations and grants to help fund the food pantry.

Mayer’s project is called “Project People.” It is designed to create Random Acts of Kindness, or RAK, as she calls it. The project will be launched at Washington Elementary School with help from CCS. “Anybody can do an act of kindness,” said Mayer. Her focus is on future generations and addressing issues, such as divorce, gangs and drug use.

Guest Speaker
The guest speaker was Nick Deeter, founder of Orthopediatrics in Warsaw. He spoke of leadership stating, “Leadership is an attitude cultivated over time. Leadership is not about being elected or appointed to an office.”

He said each small decision makes someone one step closer to becoming a leader. While it took a lot of hard work, Deeter said his company became the leader in pediatric orthopedics in just six years. Deeter’s oldest son, Tom, graduated from the United States Naval Academy in 2011. “When he graduated from the Naval Academy, he was a leader,” Deeter stated.

He said being a leader is far from an easy thing to do. Some leadership roles are easier than others. Being a leader for a Scout troop, for instance, is easier than leading NASA, Deeter said.

“You will have many failures along the way, but that is fine as long as you keep learning,” he said.

Before he wrapped up for the evening, he said one more important part of being a leader is to never give up. He concluded with a parting thought, that his grandfather, Chub Smith, always said to Deeter. “Always remember that the lead sled dog is the only one with a view.”

MaryCatherine Mayer and Nolan Sponseller were chosen to serve as at-large members for next year’s class.