Warsaw Biblical Gardens opened for its 2013 season on April 15.

Originally constructed in 1991, the former scrap yard now contains more than 120 species of plants, not including the variety of subspecies. Despite the plethora of botanical beauties in the garden, head gardener Pardee Gunter has just a few standards he must adhere to when deciding what to plant there.

“The basic idea of the garden is that everything in here has to have some reference to the Bible,” Gunter said.

Naturally, this means plants like olives, grapes and figs are in the garden, since they’re referenced more than a few times in the Bible. Other plants, such as sage, barley, mustard, pomegranate and many other plants referenced in the Bible are at the gardens, but also some plants that aren’t mentioned by name, such as the apricot and quince tree, which botanists believe may have been the “fruit” that was consumed by Adam and Eve, rather than an apple. Scholars believe many times, when an apple is referenced in the Bible, it may be talking about one of these fruits instead. 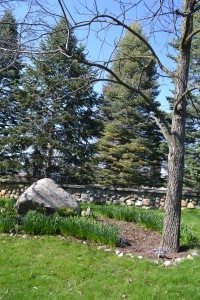 Some plants in the garden are actually not mentioned at all in the Bible, but botanists know they were used in Biblical times, such as lady’s bed straw, which scholars know was used to stuff pillows and mattresses.

Plants from biblical myths are at the gardens as well. “A legend says that Judas, after he betrayed Jesus Christ, hung himself from a red bud,” Gunter explained of the small trees near the middle of the garden.

Many of the items in the gardens make their mark from stories such as these. The sage plant, for example, is said to have given the Israelites the design idea for the menorah. Solomon is said to have built his temple out of Cedar of Lebanon, which is also on display at the Warsaw Biblical Gardens.

To learn more about these plants and many others, visitors can tour the gardens – which are divided into sections like herbs and crops, orchard, forest and desert – with Gunter for a donation of $2 per person. The gardens also offer OnCell Audio Tours for free by calling 574-344-4080; the cellphone-guided tour is about 20 minutes long.

Booklets with valuable information about the plant life in the Warsaw Biblical Gardens can be purchased at the gardens for $3 and seeds are available for purchase directly from the plants during years when the crop is good.

Warsaw Biblical Gardens is also available to rent for weddings for $100 for two hours and $50 per additional hour.

Warsaw Biblical Gardens is located adjacent to Center Lake. It is open from dusk to dawn now until Sept. 15 for individual walk-throughs, tours, weddings and photography opportunities and volunteer opportunities.