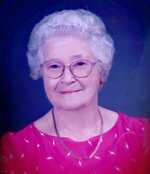 Pauline L. Gibson, 97, a former resident of rural Pierceton, Ind., passed away at 2:15 p.m. Thursday April 4, 2013, at Miller’s Merry Manor, Columbia City, Ind., where she had been a resident for the past seven years.

Visitation will be from 3 p.m. to 7 p.m. Monday, April 8, at Smith and Sons Miller Chapel, South Whitley. The funeral service will be held at 10 a.m. Tuesday, April 9, at the funeral chapel, with Pastor David Arnold of Columbia City United Methodist Church, officiating. Burial will be in the South Whitley cemetery.

Memorial contributions may be made to Shriners Hospitals for Children.