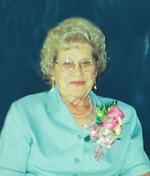 Inez Sickafoose, 94, of North Manchester, Ind., and a lifelong resident of Cleveland Township, Whitley County, died at 11 a.m. Wednesday, April 3, 2013, at Peabody Retirement Community in North Manchester where she had been a resident since March 2011.

She was born May 2, 1918, in Cleveland Township, a daughter of the late Clarence and Vada (Pence) Plattner. She attended Krider Grade School and then graduated from South Whitley High School in 1936.

She was a member of Centerview Community Church.

She was preceded in death by a daughter: Diann Carroll; two brothers: Howard and Kenneth Plattner; and a sister: Marjorie Kneller.

Visitation will be from noon to 2 p.m. Saturday at Smith & Sons Miller Chapel, South Whitley. The service will follow at 2 p.m. in the funeral home with Chaplain Sue Babovec officiating. Burial will be in South Whitley Cemetery.

For those who wish, memorials may be made to Whitley County Ag Museum or 4-H Learning Center.