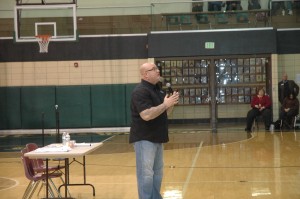 At 6 p.m. Thursday, March 21, two local high school rivals will showdown in the “Riley Dodgeball Challenge.” The event, a dodgeball tournament benefiting Riley Children’s Hospital in Indianapolis, will feature 12 student teams per school as well as a staff team for each high school.

On Thursday, Jan. 31, and Friday, Feb. 1, well known youth motivational speaker Jeff Yalden from the MTV reality show “MADE” emptied his heart in an attempt to touch the hearts of WHS and WCHS students following the devastation of two student suicides at WHS and one student suicide at WCHS. (See Related Story)

The effect made both on Yalden and the students in regards to each other was so great that he suggested checking in with the schools again on his way from an Evansville appearance to his flight in Chicago. The visit prompted Don Harmon to suggest featuring a dodgeball tournament between the two schools where Yalden could speak with students of both schools and the community.

“The neat thing is our kids and Warsaw’s kids are touched by Jeff,” Stated Wawasee High School Principal Don Harmon. “This is going to be a fun thing to do to get our kids involved. All proceeds are being split between Warsaw and Wawasee to send to Riley Children’s Hospital.”

Both schools feature a “Riley Week” for students to raise awareness about the Indianapolis based children’s hospital. Wawasee’s Riley Week is currently taking place this week and will conclude in a “Pow Wow” for students on Friday. Warsaw Community High School will host their Riley Week next week which will conclude in the dodgeball tournament on Thursday and the “Riley Dance Marathon” on Friday.

“Dodgeball is something our kids love to play. Jeff suggested he’d be in Indiana nest week and flying out on Friday and wanted to check in,” said Warsaw Community High School Principal Troy Akers. “It fits really well calendar wise for both schools. Jeff has even offered to provide the prize funds for the winning teams. Our kids have been through a lot and Jeff helps them with the basics on how to cope with life. We want our kids to have fun –it doesn’t matter what school they go to, they need to have good, clean fun.”

The event is open to the student and community spectators. Admission into the tournament is $2 and team registration is $25. Students interested in registering a team must be comprised of either two males and three females or two females and three males.

For more information on the event, volunteering to help with the tournament or to offer a donation to be given to Riley Children’s Hospital contact Wawasee High School at 574-457-3147 or Warsaw Community High School at 574-371-5099.