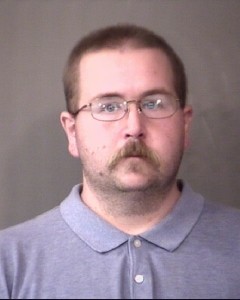 Kent Flannery was sentenced this morning to a total of 40 years in prison for the crimes of incest and child molestation.

On Feb. 4, Flannery appeared before Kosciusko Circuit Court Judge Duane Huffer and pleaded guilty to the class B and class A felony counts respectively. Today, while being sentenced, the Milford man said he intends to seek counseling for his “problem.”

Flannery, 31, was arrested in October for molesting a family member. Child Protective Services learned of the allegations and brought the information to the police. Through investigations it was found the incidents had possibly been occurring since 2008.

In accepting a plea, defense attorney Jay Rigdon told the court today, “He has taken responsibility for his actions and the plea takes into account those things. He simply wants to express his regrets and sorrows to the court and to his child.”

Prosecutor Dan Hampton, however, called the crimes “almost unspeakable circumstances of which I cannot describe. The best effect it had on the family was expressed so eloquently in a 5-page letter from the family … the gravity of the situation is also expressed. I find it difficult to talk about this case.”  Flannery himself said, “I do intend to get help and figure out why I have the problem that I had and hopefully get better.”

“This is a very sad and very tragic case,” Judge Huffer added. “The duty of parents is to love and nurture a child in a safe environment and you have failed in that duty and it’s so sad because I have known your family for a long time. You failed your family [and the victim]. I just can’t imagine the shame you must have and I hope you have it.”

For the class A felony count of molestation, Flannery was handed 30 years in the Indiana Department of Corrections. On the class B felony charge of incest, Judge Huffer issued 10 years for a total of 40 years incarceration. Flannery was given credit for 129 days already served.

In exchange for his plea, a third count of child molesting was dismissed.