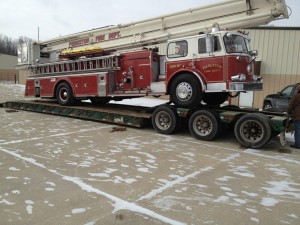 Pierceton Fire Department’s 1969 Snorkel fire truck was taken to Palatine, Ill., on Wednesday to be featured in a memorial service to three fallen firefighters.

Saturday will mark a somber anniversary for the Village of Palatine, Ill., as they remember three firefighters killed in the line of duty.

In the early morning hours of Feb. 23, 1973, Warren Ahlgrim, Richard Freeman and John Wilson were among the first on the scene of a fire at the Ben Franklin variety store where a blaze had started in the basement. Although they wore self-contained breathing apparatus, records show the men asphyxiated due to smoke inhalation and the superheated air in the basement.

In an effort to commemorate the 40th anniversary of the tragic deaths, Elgin, Ill., firefighter John Tobin wanted to bring back as much history possible to give residents of the Illinois community a real feel for the loss of the three dedicated firefighters. In doing so, he tracked down the fire truck that was first on the scene of that fatal fire and he located it here, in Pierceton.

Pat Gratzianna is the deputy fire chief at Palatine Fire Department. He said, “That truck is a key piece of the puzzle. It was the first on the scene and was instrumental in fighting that fire.” 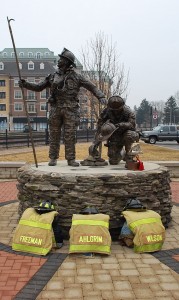 This memorial in Palatine, Ill., commemorates the loss of three firemen killed in the line of duty on Feb. 23, 1973.

Gordon Baker is a second lieutenant with Pierceton Fire Department. He said the truck has been used without problems since it was purchased for $25,000. “It’s passed all the inspections and it’s a great truck,” he explained. “To replace it with all of the equipment today would cost at least $750,000.”

Tobin contacted Pierceton and asked to borrow the truck for the 40th anniversary memorial. A trucking company picked the fire truck up on Wednesday and safely delivered it to Palatine, Ill. “This isn’t costing our taxpayers anything,” Baker assured, noting that in the event a ladder truck would be needed while the rig is in Illinois, Warsaw, Winona Lake and/or Syracuse fire departments would be called.

Saturday’s memorial service will feature a formal procession of the members of the Palatine Fire Department, their Honor Guard and the 1969 Snorkel from the fire station to a permanent memorial honoring the fallen firefighters. The service will include a wreath laying and a memorial bell will be rung for each of the men.

The ceremony in Illinois is scheduled to begin at 9 a.m. and the public is encouraged to attend.