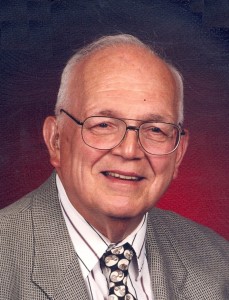 Don was born the only child of Russell S. and L. Marie (Inks) Bixel on June 15, 1930.  Growing up on West Market Street, he enjoyed and was proud to be one of the “West End Kids.”

He was a 1949 graduate of Warsaw High School where he played football and was a shot putter on the track team. During his senior year the track team earned a trip to the state finals.  Don’s shot put record at WHS was not broken until 1955. He was a lifetime resident of Warsaw.

Laura Mary Rodgers accepted Don’s proposal of marriage and on May 12, 1963, they became husband and wife. This year they would have celebrated their fiftieth wedding anniversary.

For 40 years and until his retirement in 1992, Don was the owner and operator of Bixel Paint Corporation in Warsaw.

He was a member of First United Methodist Church and Masonic Lodge F & AM #73 – both in Warsaw; Fort Wayne Valley Scottish Rite, Fort Wayne Mizpah Shrine and the Kosciusko County Shrine Club. He was currently serving on the Oakwood Cemetery Board of Regents and was the past president of Kosciusko County Master Gardeners Association.

He was a member of the fall 1997 Master Gardener Class and was the first intern of his class to complete his volunteer hours. He won a number of ribbons at the Kosciusko County Fair for the variety of garden flowers. He did all of the landscaping around their home using many flowers to attract hummingbirds and butterflies. He also drew up the landscaping plans for his cousin’s South Bend, Ind., home.

Don enjoyed traveling – especially the Rocky Mountaineer rail trip through the Canadian Rockies in the summer of 2005. He always looked forward to the many January vacations spent at Fort Myers Beach, Fla. He was always ready for the monthly Bixel “Cousin’s Day” spent in Plymouth, Ind., South Bend or Warsaw.

Don enjoyed many years of bowling at Holiday Lanes and Gilliam Lanes. He was a season ticket holder for Warsaw basketball games for many years and was especially excited to attend the 1984 state championship tourney. He followed NFL football for years, particularly the Chicago Bears and then more recently the Colts with Peyton Manning.

Don is survived by his wife, many cousins and their families, their big black and white cat that he named Butch and very special friends:  Roy and Joellen Hauth, Jack and Velma Baugher and Jonna Stahl.

He was preceded in death by his father and his mother.

Visitation will take place from 2 p.m. to 4 p.m. and from 6 p.m. to 8 p.m. Wednesday, Jan. 30 from at Titus Funeral Home, Warsaw. A service celebrating the life of Donald O. Bixel will take place at 10:30 a.m. Thursday, Jan. 31, in the funeral home. Pastors Toni and Scott Carmer of First United Methodist Church will officiate. Burial will follow in Oakwood Cemetery, Warsaw.