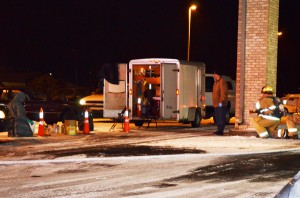 A meth lab was located at the Super 8 Motel in Warsaw Saturday night. (Photo by Stacey Page)

Warsaw Police located a methamphetamine lab at the Super 8 Motel on Frontage Road in Warsaw late Saturday night and arrested a husband and wife.

Shawn Luther Morton, 50, and Dawn Ellen Morton, 47, both of Warsaw, were both arrested in September  when they were found to have a meth lab in their home at 2259 Chapman Lake Dr., Warsaw. They were also arrested on Nov. Nov. 14 when police also located them in possession of a meth lab. On Saturday night, they were re-arrested at the motel and are now being held without bond on class A felony charges of dealing methamphetamine.

In September, both of the Mortons were charged with felony dealing and manufacturing  methamphetamine. At that time, their individuals bonds were set at $20,000.

No information was provided by police on the November arrests.

Winona Lake Fire Department was called to the motel Saturday night for standby while the officers dismantled the lab, which appeared to be a one pot meth lab. Firefighters stood ready to douse any explosion that could have resulted from the lab.