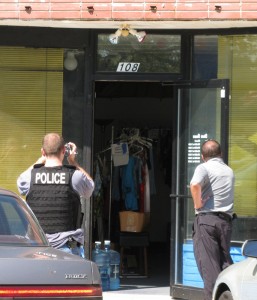 Agents of the IRS Criminal Investigation Division documented items inside California Dreamin as part of a federal raid in September. (File photo)

Sam Stimmel has opened a third location of California Dreamin, a variety store of sorts that was part of a federal raid in September.

Stimmel confirmed to the Kendallville News Sun that he has opened a third store at 120 W. Main St. in Albion. At that location, California Dreamin sells “novelties and gifts.”

An Elkhart store by the same name, Stimmel tells the media outlet, sells computers and tools. And in North Webster the store, located next to Stimmelator’s Gentlemen’s Club at 108 E. Washington St., carries “female wear” and stun guns.

All three locations also carry “potpourri” known as B2.

B2 is not inherently a synthetic drug or synthetic marijuana and therefore does not automatically fall under Indiana’s law that bans it. Stimmel told The Sun, “What we do is legal. It’s aroma therapy. You’re not supposed to be smoking it.”

Synthetic drugs are made to mimic highs like those achieved from drugs such as marijuana or cocaine, but they are sold as “potpourri,” “bath salts” and “incense.”  Most are labeled “not for human consumption,” but the products are still generally used orally, inhaled or even injected.

Indiana lawmakers stiffened laws pertaining to synthetic drugs in March and identified more than 60 chemical compounds that are illegal. The problem in enforcement comes because makers of the drug slightly change the base compounds or even just the name of the product. Warsaw Police Det. Paul Heaton said that by the time police acquire the product, have it tested and identify it, it is then being marketed under a different name so the process never ends.

In September, Indiana Attorney General Greg Zoeller announced a stronger crackdown on the state law which says retail merchants caught selling the drugs will face penalties, including the loss of their retail merchant license for one year.

“This synthetic drug enforcement initiative is intended to send a strong message to businesses who continue to sell synthetic drugs despite the law and the risks to the public,” Zoeller said. “Law enforcement and health officials agree that the danger of having these drugs in the open marketplace and available to the public is significant. It is our responsibility to use the resources available to prevent these unregulated and illegal drugs from being available on the shelves at the corner store.”

Using synthetic drugs can result in dangerously high body temperatures, racing heart rates, high blood pressure and even permanent organ damage. Synthetic drug use has also been linked to kidney failure and the psychotic effects of it can last for several days.

On Sept. 12, agents from the Internal Revenue Service raided Stimmelator’s Gentlemen’s Club, California Dreamin and Stimmel’s private residence on Syracuse-Webster Road, all located in North Webster. At that time, California Dreamin was not yet officially in business, but it was stocked with a variety of items including women’s lingerie.

Kerry Hannigan, public information officer for the IRS, confirmed during the raids that agents from the IRS Criminal Investigation Division were acting “on official business,” but declined to offer any other information.

Agents from a number of Indiana counties, and even from Michigan and Illinois, were in North Webster most of that day processing all three locations where boxes of items were confiscated, but officials would not say what those items were. Stimmel told The Sun the investigators took paperwork but declined to expound on what the paperwork involved or why the agents targeted his business.
Mary Hatton of the U.S. Attorney’s office in Hammond confirmed that any federal charges would be pursued through U.S. District Court in South Bend. As of today, no federal charges have been filed against Stimmel.
In a final statement to The Sun, Stimmel said he believes selling B2 is “a positive thing” noting he sells to a former methamphetamine addict who says without the B2 he would likely still be using meth.
The stun guns being sold at California Dreamin can be sold legally as long as Stimmel follows the law that prohibits selling to anyone under the age of 18.