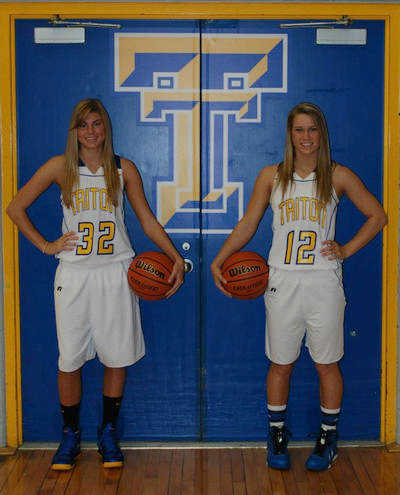 BOURBON — Normally in November, fans in and around Bourbon are setting the bar high for the Triton boys basketball team. While the expectations are sky-high as usual for the Trojans, the girls team have quietly moved into the conversation of one of the better teams in the area, let alone the state.

Naturally, the pedigree of girls basketball at Triton points to the back-to-back state title teams in 2000 and 2001. Triton, however, have won just two sectional titles and have advanced no further than Fort Wayne Canterbury in two regional cappers since bringing home the second gigantic trophy in ’01. The most recent heartache in the postseason came last February at Oregon-Davis, where a stout Lady Trojans were bounced by the equally talented hosts.

The 1A No. 2 Oregon-Davis squad will likely present another road block, as Triton has won just two of seven tournament matchups against the perennial contenders from Hamlet since 2001.

Can Triton make the push in what promises a season full of tests of fortitude?

“Last year’s sectional loss was tough,” said Triton head coach Adam Heckaman, returning for his fifth season. “The kids took it hard because they knew we had put together a good game plan and had executed it for two-and-a-half quarters. We let our guard down for a quarter-and-a-half and lost to a team that showed no quit. I think our returning kids learned a great deal about themselves after that and realized that they have to be hungry the entire game and at practice in order to reach their potential.”

Triton begin the season ranked No. 7 in the 1A preseason poll, always a subjective notion, but still regarded with some level of sustained success from those around the state. The schedule for Triton will quickly test that lofty ranking, as will open at home Friday night against 2A No. 22 North Judson. Then face 1A No. 10 Argos, backyard rival Plymouth, 1A No. 21 South Central and 3A No. 3 NorthWood all before Thanksgiving.

A light snack before facing 4A No. 12 Warsaw and a showdown with Oregon-Davis at home surrounding the Christmas holiday and a loaded Bi-County Tournament in January?

“One thing we have focused on is being able to compete night in and night out at a high level,” Heckaman said. “We have really worked to build a scheduled that will force us to do that in order to prepare us for the tournament.

“This group, so far, seems ready to push themselves to do that.”

Leading the Lady Trojans will be a pair of seniors in Shana Anderson and Breanna Lemler. The duo led the squad last season to a 16-6 record and a share of the Northern State Conference title with Bremen and New Prairie before losing in the sectional final to O-D. Heckaman will rely on the two, particularly Anderson’s scoring touch, to guide a squad that lists just nine on the opening varsity list, four of which are sophomores.

“Our seniors are our leaders,” Heckaman stated. “They have been through the progression in the program and realize where we were just four years ago. They know how much work they have to put in to help us get to where we are now. They will do a great job of leading us because they know its their last year to have an immediate impact on the program.”

But it won’t be just two seniors doing all the heavy lifting as sophomore Kylie Mason had a big push during the end of last season, leading Triton to a victory over Argos in the opening game of the sectional with 17 points. Junior Taylor Hatfield also had a big tournament, scoring 25 points in the Argos and O-D games. The Triton roster returns seven players that saw the floor in at least one of the sectional games.