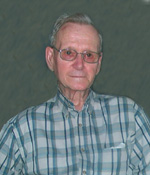 He was born Aug. 8, 1924, in Bippus, Ind., a son of the late Irvin R. and Almeda (Zeigler) Myers. In 1933 the family moved to Cleveland Township, Whitley County. He attended South Whitley High School.

Fritz spent his work career as a farmer. At age 45, he went to work for Farmer’s Elevator at South Whitley for 20 years, retiring in 1989. In 1961, he received the “Conservation Farmer Award” from the Whitley County Soil and Water Conservation District for his conservation planning on his 160 acre farm named “Contour Acres”.

He was also recognized as “Outstanding Neighborhood Soils and Crops Manager of 1959” for his efforts in raising the productivity of his land. He loved farming, fishing and spending time with his family.

He was preceded in death by a brother: J. Edward Myers.

Visitation will be from 1 p.m. to 4 p.m. Friday, Oct. 12, at Smith and Sons Miller Chapel, South Whitley. The funeral service will be held at 4 p.m. Friday at the funeral home with Pastor David Wagner officiating. Burial will be in the South Whitley Cemetery.