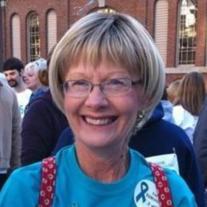 She was born June 28, 1949, in Peru to parents Dean and Mary Helms Gallahan.
At the Mexico Brethren Church on Sept. 7, 1969, Jeri married Randy Smith, who survives.

She was a homemaker and a stay at home mom, in earlier years she was manager of the Country Cousins Children’s Store. She was a part of the Gallahan Oil Company, Peru.

Jeri was a member of the Olive Branch Church of God where she was very active in church and the women’s Bible study. She was an avid Purdue fan and tailgater. She loved to cook and take homemade pies and meals to various friends and family.

She participated in the Teal Ribbon Ovarian Cancer Run and Walk for the past five years. Jeri was also a 1967 graduate of North Miami High School.

Visitation will be from 3 p.m. to 8 p.m. Tuesday, Sept. 25, at Olive Branch Church of God, Roann. Funeral services will be at 10:30 a.m. Wednesday, Sept. 26, at the church with pastors Allen Barton and Jeff Sumner officiating. Burial will be at Akron Cemetery, Akron.

Memorial contributions may be made to Ovar’coming Together Inc. 2625 N. Meridian Street, Suite 108, Indianapolis 46208, www.ovariancancer.org, for ovarian cancer research.

Envelopes are available at the funeral home. Arrangements have been entrusted to Hartzler Funeral Home, Akron.