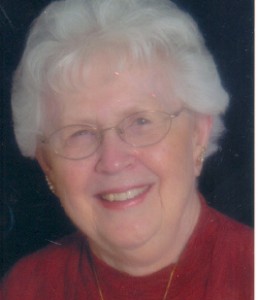 She volunteered at numerous Naval Hospitals, the Navy Relief Organization, American Red Cross and served as a Pink Lady at Coronado Naval Hospital. She was an avid bridge player, swimmer and diver. She was a guest of the Queen of England at Buckingham Palace in 1972.

Services will be held Thursday August 23, 2012 at 11:00 AM in McHatton-Sadler Funeral Chapel Warsaw, IN. Reverend Robert Livingston will officiate. Interment will be in Point Loma National Cemetery Point Loma, CA.