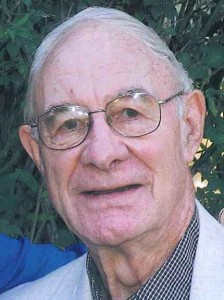 He was born on Sept. 7, 1929, in Noble County, Ind., to Adrian M. and Mary R. (Birch) Geiger. He was a lifetime resident of Noble and Kosciusko counties. He graduated in 1947 from Cromwell High School, attended International Business College in Fort Wayne, Ind., and graduated in 1951 from State Police School at Indiana University in Bloomington, Ind. On Sept. 12, 1948, in Kimmell, Ind., he married Bonita R. McLallin who survives.

He formerly worked for the Indiana State Police, was assigned to Kosciusko County in 1951 and in 1958 he resigned from the ISP to run for Kosciusko County Sheriff. He was in insurance sales for several years, became an insurance adjuster, and then operated Columbia City Insulation with his brother, Hugh Geiger. In 1969 he was appointed Tippecanoe Township Justice of the Peace and was holding this position when the Justice of the Peace officers were disbanded by the Legislature in 1975.

In 1976 he became the North Webster Town Judge. In January 1977 he went to work for Keith Horn at Yogi Bear Jellystone Campground in Pierceton, Ind., as Security and Registration Manager and later became Executive Vice President in charge of the park for the property owner’s association board. In 1981 he was appointed manager of the Warsaw License Branch by Jean Northerner. In 1984 he was elected as the Kosciusko County Auditor. He served as Weights & Measures Inspector for Kosciusko County from 1997 – 2002 when he retired.

He was a member of the Church of the Brethren in North Webster, Masonic Lodge # 705 F & AM in Cromwell, where he served as Past Master of the North Webster Square and Compass Masonic Lodge # 747 F & AM, & Fort Wayne Valley of Scottish Rite. He was formerly the Kosciusko County Republican Chairman from 1989 – 1993, served as precinct committeeman for Tippecanoe Township, and was a charter board member of the Warsaw Driver Education Co-op since 1982.

He was preceded in death by his parents and a granddaughter: Tamara Geiger Ridgway.

Memorial bequest may be given to Kosciusko Home Care & Hospice, P.O. Box 1196, Warsaw, IN 46581 or North Webster Church of the Brethren. Envelopes are available at the funeral home.