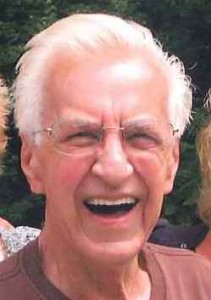 He attended high school in Chicago and attended the University of Chicago. He was a United States WW II Navy Veteran and lived most of his life in the Noble/Kosciusko County area, having moved to North Webster 30 years ago. He was married on Aug. 26, 1977, to Carroll A. (Ott) Speaker who preceded him on Sept. 3, 2009, and retired from Dana Corp. in Syracuse after 32 years of service.

He was a member of the American Legion Post 253 in North Webster, VFW in Syracuse and was a Purple Heart recipient.

He was preceded in death by his parents; his wife; two brothers: Ralph and Victor Mueller; and two stepbrothers: Delmar and Paul Sawyer.

Graveside services will be held at 2 p.m. Tuesday, Aug. 7, at the Salem Cemetery in Wilmot with Pastor Harlan Steffen of the Wawasee Lakeside Chapel officiating. Military rites will be performed by the North Webster American Legion Post 253.