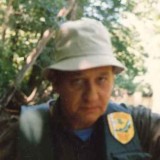 He was born on Sept., 14, 1938, in East Gary, Ind., to Olin and Maude Elizabeth (Ginter) Parkhurst. He attended East Gary Edison High School in East Gary and was a United States Navy Veteran. He retired from Bethlehem Steel in Burns Harbor, Ind. He formerly worked for the postal service and formerly owned and operated the Clark Gas Station in LaPorte, Ind.

He lived in the North Webster/Pierceton area for the past 20 years and was a member of the American Legion Post 434 in Kingsford Heights, Ind.

He was preceded in death by his parents; sister: Gail Mattox; and a brother: Richard Parkhurst.

Visitation will be from 4 p.m. to 7 p.m. Tuesday, July 10, at Owen Family Funeral Home, North Webster. Funeral services will follow at 7 p.m. Tuesday in the funeral home with Pastor Dennis Judy officiating.

Memorial bequest may be given to the Animal Welfare League of Kosciusko County, P.O. Box 1906, Warsaw, IN 46580.  Envelopes will be available at the funeral home.