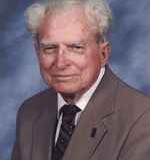 He was born in Syracuse, Ind., on Nov. 27, 1919, in a home where St. Andrews United Methodist church is currently located, to Fielden and Muriel (Baker) Sharp. Nearly his entire life was spent in his hometown.

His love for the printed word began as youngster, when he and his brother helped his father deliver newspapers to residents in the Syracuse and Wawasee Lakes area. He graduated from Syracuse High School in 1939 and attended Goshen College.  In 1942 he was drafted into the Army Air Force, serving his country for 3 years, 11 months and 14 days, including one year in India.  He reported overseas by traveling the Pacific Ocean on the way there and the Atlantic on the return trip.

On Sept. 11, 1949, he married Joan Diehl in Leesburg, Ind. She preceded him in death on June 4, 1992. He was also preceded in death by his mother and father, two brothers: Lowell and Meredith; and a sister: Shirley Gardner.

Following his discharge from the Army Air Force, he worked for the Warsaw Times-Union for a number of years including assignments as Circulation Manager and City Editor. He authored a pair of long-time local newspaper columns, first with “Confidentially Yours” in the Warsaw Times-Union and later “Under the Courthouse Dome” for The Papers Inc.  He left newspapers in the mid-1960’s to become Purchasing Manager of Whitley Products, located in Pierceton, Ind.

He helped establish the Kosciusko County Historical Society, served as its President for two years, continued on its Board of Directors for a number of years, and added service of the Syracuse-Wawasee Historical Society Board to these experiences.  He was also proud of his public service as Clerk-Treasurer of Syracuse, Kosciusko County Councilman, and member on both the County Zoning Board of Appeals and the County Planning Commission.

Appointed by the Indiana Historical Society, Ron Sharp served as the official Kosciusko County Historian for many years.  In 2000, the county was recognized as one of the top four historical programs in the state.  He and wife Joan published some 30 books of local and county history in addition to chronicles of the county’s involvement in the Civil War.

Ron Sharp joined the Lakeside United Brethren Church in 1925, maintaining his membership as it later became Calvary Evangelical United Brethren and finally Calvary United Methodist Church.  He served on the Church Board, Sunday School Superintendent, and the Pastor Parish Committee, thankful always for the blessings God had given him.

A private family graveside service will be held on Saturday, June 16, in the Syracuse Community Cemetery.  A memorial service is scheduled to follow at 2 p.m. at Calvary United Methodist Church in Syracuse.  Owen Family Funeral Home, Syracuse, is in charge of the arrangements.

In lieu of flowers, the family prefer donations be made to the Syracuse Public Library for the purchase of large print books.

(Ever the journalist at heart, Ron Sharp wrote this obituary two days before he passed away)