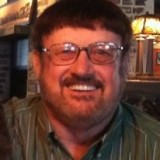 He was a self-employed contractor with Stouder Enterprises for 32 years retiring in 2004, he was a dealer for All American Homes (Willow Creek Homes), de-beaked chickens and worked for NIPSCO. In 1960 Jim was the bonus baby of the minor leagues and was signed by the Phillies and played with them for a short while.

Mr. Stouder was a 1960 graduate of Nappanee High School, member of Dutchtown Brethren Church, and very proud of his lawn and landscaping at home – nobody was allowed to walk on the grass especially if it was wet. He was an avid softball player for 30 years playing in leagues from Warsaw, Columbia City, Nappanee, Bippus, Fort Wayne, Elkhart and Goshen. He also played in the senior leagues (over 50) in Sebring, Fla., during the winter months.  He taught his girls by experience – such as getting told to get in the driver’s seat and then say to get going because there’s a dump truck coming up from behind or teach the girls to swim by throwing into the lake and simply telling them to swim;  He taught them different sports. His girls learned while working side by side with their dad whether picking up rocks, surveying or riding the back hoe – everything but ‘girl stuff’; every day was an adventure living with him.

He was preceded in death by a daughter: Brenda S. Stouder; and his father: Earl Stouder.