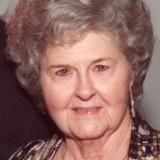 She was born April 22, 1923, in Pennville, Ind.; to David Robert and Mary Ellen (Miller) Taylor.  Her family moved to Warsaw in 1937. After WW II ended Fern and Donald settled in Kosciusko County and eventually bought a house in Winona Lake; remained in the Warsaw area until moving to Zionsville to be closer to their daughter.

She married Donald L. Quine, on June 21, 1941, in Warsaw. Donald was serving in the U.S. Air Corp and after his marriage and was allowed to live off base – so Fern went with him until he was sent out of the country. She studied music and taught piano, organ and vocal lessons for 30 years.

She was a 1941 graduate of Warsaw High School; active in her church with her musical talent and taught Sunday school; member of Winona Lake Grace Brethren Church since 1984; former member of Warsaw American Legion Auxiliary and Women of the Moose; she was a very devoted wife, mother and homemaker.