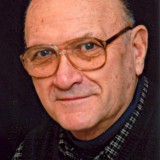 Jerry was a 1949 graduate of Beaver Dam High School, after which he enlisted in the U.S. Air Force from 1950-1954. He was a lifetime resident of Kosciusko County, Indiana where he attended Riverview Community Church in Tippecanoe, Ind. He worked for 37 ½ years as the Midwestern Art Director for LM Berry & Company in Warsaw, and he was the founder and owner of Signs & Designs by Hudson working there from 1990-2002. Jerry was also a former board member of the Bell Aircraft Museum in Mentone, Ind.; and a life member of the American Legion Post #49 of Warsaw. He and his wife moved to Grace Village Retirement Community – Robin Hood Estates in 2006.

He was preceded in death by his parents, and two brothers: Earl Eugene Hudson and William F. Hudson Jr.

Visitation will be held from 2 p.m. to 4 p.m. and 6 p.m. to 8 p.m. Tuesday, May 29, at Redpath-Fruth Funeral Home, Warsaw, .as well as one hour prior to the service on Wednesday, May 30. His funeral service will be conducted at 11 a.m. Wednesday, May 30, at the funeral home, officiated by Pastor Rod Ruberg. Burial will follow at Mentone Cemetery in Mentone with military funeral rites conducted by the American Legion Post #49 and V.F.W. #1126 both of Warsaw, and the US Air Force Honor Guard.

Memorial donations in Jerry’s name may be directed to the Lawrence D. Bell Aircraft Museum, 210 Oak Street, Mentone, IN 46539; or to Grace Village Retirement Community, 337 Grace Village Drive, Winona Lake, IN 46590 to go toward the Grace Village Community Center.