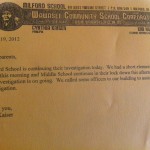 Milford parents receive second notice in a week of threats against school.

For the second time in a week Milford School was investigating threats against the property.

Milford School Principal Cindy Kaiser sent a notice home to parents Thursday saying the school was on a temporary lock down while school officials and local police detectives continued their investigation into an alleged bomb threat. The threat was found scrawled on a bathroom wall Tuesday and sources say it indicated the school would blow up that same day.

Yesterday at least one more message was found written on school property, but officials say they believe that was the work of a copy cat.

Milford Police Chief Rich Miotto says his department and the Wawasee Schools Resource Officer are following up on the case. Miotto says the second message was found written in the same bathroom at the school. Miotto says the children were never believed to be in danger but the school was put on a temporary lock down while officers were investigating.

“It has been a tough couple of days for students being out of their routine and we are ready to get back to our priority of education,” Kaiser tells StaceyPageOnline. “Please know your child is in a safe environment and we plan on a regular day (today).”